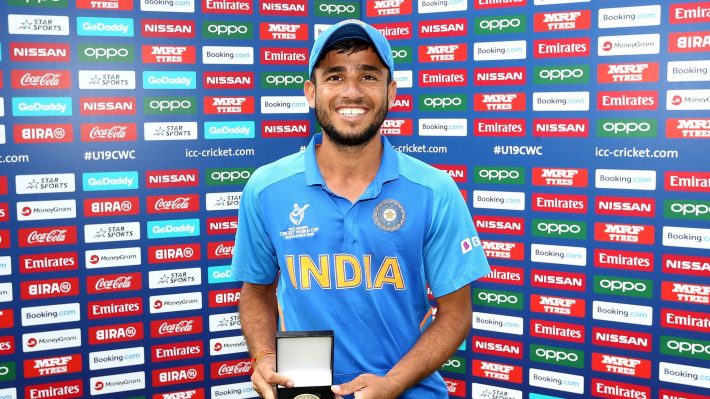 New Delhi: Ravi Bishnoi, who has impressed the legends with his leg spin in domestic cricket and the Indian Premier League, has now made his debut for Team India as well. He has been selected in the playing-11 for the first match of the T20 series against West Indies. Senior leg-spinner Yuzvendra Chahal handed over the debut cap to Ravi at the Eden Gardens in Kolkata. He has become the 95th Indian cricketer to play T20 International. On this achievement of Bishnoi, the Pakistani cricketer has congratulated him by chanting Jai Shri Ram.

Debuting in T20 International for Team India, leg spinner Ravi Bishnoi made a double blast. He achieved a major milestone in his very first match and made a place in the club of former Indian bowlers Zaheer Khan and Ajit Agarkar.

Actually, Ravi Bishnoi got a chance to debut in the first match of the three T20 series against West Indies. In the match, Ravi Bishnoi took two wickets for 17 runs in 4 overs. In this way he has become the sixth Indian to take two wickets in T20 debut. Zaheer Khan, Ajit Agarkar, Hardik Pandya, Harshal Patel and R Vinay Kumar are already included in this club.

21-year-old Bishnoi has also struggled hard to achieve this position. The journey from village to Team India has not been easy for him. He started his cricket with the practice of bowling in the fields. As a child, Ravi Bishnoi started practicing on the rough land of the fields.

Ravi Bishnoi was born on 5 September 2000 in Birami village, Jodhpur. After some time Ravi’s family settled in Jodhpur. According to his mother, even while living in the village, Ravi did not give up. He used to bowl in the fields only. After coming to Jodhpur, he got hope and Ravi got an opportunity to join Cricket Academy in Jodhpur, then Ravi took training from here.

There was a turning point in Ravi Bishnoi’s career when he was not selected in the Under-16 team. Then his father was very angry and he told Ravi to leave cricket. But Ravi’s coach Pradyot Singh took over the entire front.

Ravi Bishnoi made his mark during the Under-19 World Cup with leg spin bowling. At that time it seemed that Ravi would achieve a big position in cricket in the future. Ravi was included in his team by Kings XI Punjab (now Punjab Kings) in 2020. From here, Ravi’s career graph continued to climb upwards.

Ability has brought us to this point

Your Hands are stained with blood: Pooja Bhatt to the political class