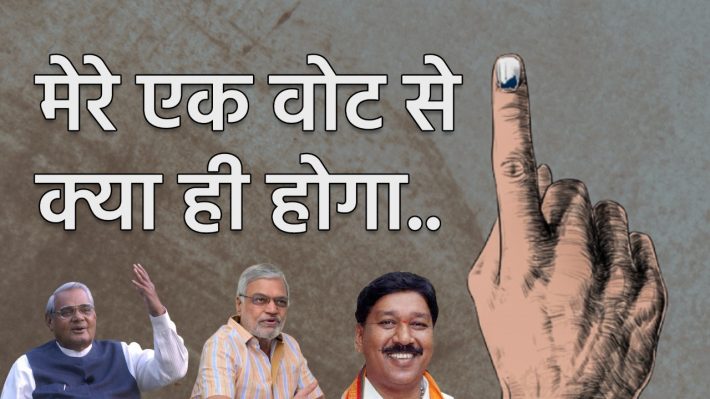 What will happen with my one vote?

People’s ideologies differ greatly from each other regarding their vote during elections. It is often seen that some people are very serious about choosing the best leader for their country. They do not want any mere promises dear leader should come to power and after winning the elections, the huge promises made before the elections should be immersed in a river. That’s why they do cast their vote, whatever the outcome may be.

But there are some people who have already made up their mind that what is the meaning of voting, it is only for the party to win. They think what will happen with our one vote. But despite being intelligent, they are unaware that sometimes just one vote has become so heavy that it becomes a means of counterattacking the entire power, and many examples of this are recorded in the pages of history.

Almost every human being is aware of the example of Atal Bihari Vajpayee government. This incident of overthrow is from the year 1999, which is exactly like the book, which has been getting dusty for years, but this dust has not been able to blur even a single letter of the book. Atal Bihari Vajpayee’s government at the center was formed with the support of many parties. But after the AIADMK withdrew support, the government faced a motion of confidence in Parliament. Atal ji got 269 votes in favor, while 270 votes were against, and the government fell by just one vote.

CP Joshi has probably paid the worst for not voting. In the 2008 assembly elections in Rajasthan, CP Joshi was the chief ministerial candidate from the Congress side. In this election, he got 62,215 votes, while Kalyan Singh got one more vote i.e. 62,216 votes. The point of the issue is that CP Joshi’s mother, wife and driver did not even cast their vote. If these three people had voted, then CP Joshi would be ruling the power and this one vote would not have dared to overtake them by one vote.

AR Krishnamurthy of JD(S) is also included in this line of assembly elections, whose election in 2004 resulted in a complete stop by just one vote. In the assembly elections held in Karnataka, Krishnamurthy got 40,751 votes, while Congress’s R Dhruvanarayana got 40,752 votes. The surprising thing is the same here that Krishnamurthy’s car driver did not vote and this one vote left him deeply hurt.

Not only in the country, but also in foreign countries, due to lack of one vote, many times those in power have had to face their faces. In 1875, monarchy was abolished in France by just one vote and democracy was established. The German people are also well aware of the power of one vote. In 1923, Adolf Hitler won by a margin of just one vote and became the head of the Nazi Party. And thus history changed forever. In the 19th presidential election held in America in 1876, Rutherford B. Hayes was elected president by securing 185 votes. In these elections, his rival Samuel Tilden got 184 votes, thus missing out on becoming the head of the world’s richest democracy by a margin of just one vote.

Hundreds of such examples are buried in the pages of history singing the saga of how important a vote is, who repeatedly plead that they must exercise their right and vote.