Lucknow: The Uttar Pradesh Chapter of PHDCCI in association with the Department of Horticulture and Food Processing, Uttar Pradesh organized an interactive virtual conference on Value Chain Development of Potential Fruits in Uttar Pradesh on 28 February 2022 from 12 Noon to 1:30 PM. The main objective of the session was to strengthen the efforts of the government to double the income of farmers and improve the agricultural value chain through export of potential agricultural produce from the state.

Sandeep Kaur, IAS, Special Secretary, Department of Horticulture and Food Processing, Govt. Uttar Pradesh said that Uttar Pradesh is the largest producer of Mango and Guava and the Department of Horticulture and Food Processing provides incentives for the same. He informed that with the right approach and collaboration between the department, farmers and other stakeholders in this segment, the income of the farmers has increased substantially but is yet to reach the desired level. He said that quality production plays a very important role in ensuring good financial returns and hence production should be given due importance and attention should be given with precision. He also told about the various benefits given to the farmers under the food processing policy of the state and said that the farmers should be made aware of these schemes and policies so that they can get maximum benefits.

Dr. RK Tomar, Director, Department of Horticulture and Food Processing, Govt. Government of Uttar Pradesh highlighted the Integrated Horticulture Development Mission (MIDH) and informed that MIDH is a centrally sponsored scheme for holistic development of horticulture sector which includes fruits, vegetables, root and tuber crops, mushrooms, spices, flowers, aromatic plants. , coconut, cashew, cocoa and bamboo. He said that under this scheme the Government of India contributes 60% of the total outlay for the development programs in the states, of which 40% is contributed by the State Governments. He emphasized in detail on fair trade and marketing of horticulture produce of the state and said that if the marketing is done properly, it will lead to significant improvement in the income of the farmers.

Anjani Srivastava Managing Director, HOFED informed that HOFED has organized several buyer-seller meets for mango and guava growers not only in the state but also outside the state, which has not only helped in expanding the market share of these fruit growers. results, but also resulted in creating a perfect supply-demand balance. He urged the scientists of Central Institute of Subtropical Horticulture to do more research to increase the shelf life of fruits, especially mango and guava so that they can be preserved in good condition for a longer period of time.

Dr. CB Singh, Regional Head (UP, Uttarakhand and Bihar), APEDA said that though the state is doing well in mango production and export, but Guava and Amla also have huge opportunities. Giving the example of famous Prayagraj’s guava and Pratapgarh’s gooseberry, he said that with the cooperation of the government, farmers and industrialists, a lot can be achieved from these fruits. He also highlighted the APEDA schemes, under which up to 75% subsidy is given to the farmers of land-locked states such as Uttar Pradesh.

Pradeep Multani, President, PHDCCI said that UP is now resilient to its position to emerge as a preferred destination for food processing, cold storage and warehousing industries in the country, but despite significant production, small and marginal Farmers, who farm 65% of Uttar Pradesh’s agricultural sector, face challenges in connecting to value chains and markets. He noted that many challenges remain in the development of value chains, which are often fragmented, lack investment, fail to include vulnerable groups, and are missing critical links between farms and markets, and, therefore, It is important to address these shortcomings to solve rural areas. Improvement in socioeconomic problems and poverty conditions.

Dr. Lalit Khaitan, Chair, UP Chapter, PHDCCI congratulated all the eminent speakers and participants for being a part of such a meaningful virtual conference. He said that while Uttar Pradesh is the second largest producer of mangoes in India with a production of 4.5 million metric tonnes, the quantum of mango export from the state is negligible in the total national production (less than 0.5%). The total export of mangoes and mango products from the state is 2,575 MT, which is less than 1% of the total domestic export of 307,981 MT. He concluded by saying that if due attention and developmental attention towards production and export of underutilized fruits (jackfruit, balun, jamun etc.), agricultural value chain and farmers’ income as well as potential fruits (mango and banana), strategy will be adopted. can be greatly increased.

Dr. SK Shukla, Paddy Scientist (Horticulture), Central Institute of Subtropical Horticulture (CISH) while focusing on the importance of agriculture said that it is the backbone of the economy and horticulture is its important area. He also said that the Institute is actively engaged in Horticulture-Entrepreneurship through Institute technologies and will continue to help the farming community through technology backstopping, capacity building and stakeholder support through community approach.

Raghav Agarwal, Director, Vitade Industries, Pvt. Ltd. said that food processing is one such tool which provides greater variety in food items and hence enhances consumer choice. He also said that the food processing sector can attract huge amount of investment/FDI in the state if proper attention is given to this sector.

Mukund Halvasia, Co-Chairman, UP Chapter, PHDCCI welcomed and felicitated all the eminent speakers and delegates present during the webinar session and conducted the entire session excellently and took the questionnaire from the participants to the panelists.

Atul Srivastava, Resident Director, UP Chapter, PHDCCI presented a formal vote of thanks to the Chief Guest and all the speakers and participants for their valuable time and deliberations in the session.

More than 150 active participants participated in the webinar, mainly representatives of the Department of Horticulture and Food Processing, Government of India. of Uttar Pradesh, officials of CISH, APEDA, representatives of food processing industry, entrepreneurs, senior industrialists, policy makers as well as other stakeholders working in this sector. 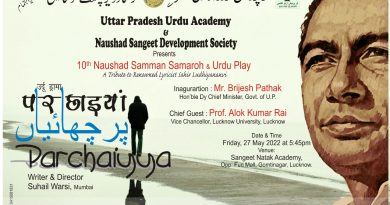