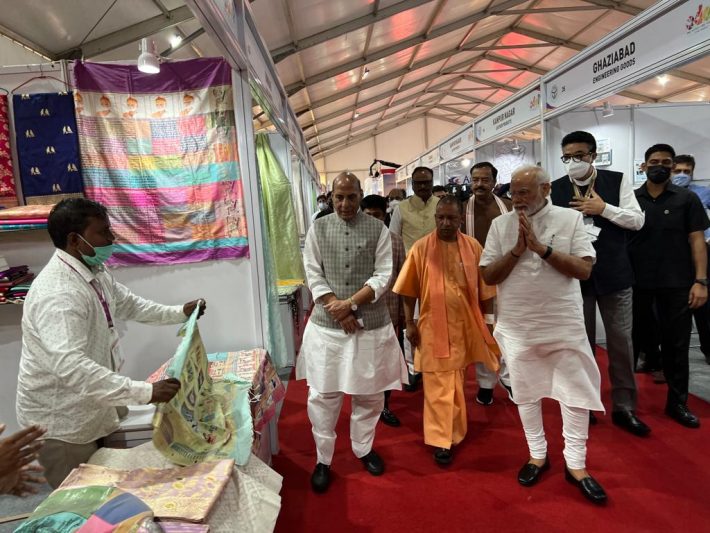 Prime Minister Narendra Modi launched more than 1400 industrial projects in Uttar Pradesh worth an investment of Rs 80,224 crore at an impressive function at Indira Gandhi Pratishthan in Gomtinagar on June 3.

The function marked the third ground breaking ceremony (GBC) since the Investor Summit held in Lucknow in February 2018 after Yogi Adityanath took over as Chief Minister in 2017. Two earlier GBC events were held in July 2018 and July 2019.

The GBC-3 was marked by the participation of top industrialists such as Gautam Adani of Adani Enterprises, Kumar Mangalam Birla of Aditya Birla Group, Niranjan Hiranandani of the Hiranandani Group, and many others.

Union Defence Minister Rajnath Singh also addressed the gathering and said that it was the result of the efforts of Prime Minister Modi and Chief Minister Yogi Adityanath that Uttar Pradesh was making waves in the industrial world.

Prime Minister Modi said that the world was watching the potential of India and was appreciating India’s performance in different fields. India had emerged as the world’s third largest energy consumer country and was at number 2 in global retail growth. The FDI of 84 billion dollars coming to India was a record. He laid emphasis on One Nation-One Tax GST, One Nation-One Grid,One Nation-One Mobility Card, and One Nation-One Ration Card.

He complimented Yogi on heading the first government in 37 years to be returned to power in the Assembly election. He also expressed the hope that UP will contribute to India becoming a 1 trillion-dollar economy in the coming years. Modi also invited all present to visit Varanasi, which had been transformed. It was an example of the transformation of UP, he said.

Chief Minister Yogi said in his address that his government had adopted the mantra of ‘reform, perform and inform’ as envisaged by Prime Minister Modi. The government had created an investment-friendly environment in UP and in addition, traditional enterprises were being encouraged under the ODOP scheme. Yogi also extended his greetings on Modi completing 8 years as Prime Minister. Yogi assured the investors that all possible help would be given to the investors by the state government. “Not only will the interest of the investors be protected in the state, but they will also get all kinds of protection,” assured Yogi.

He also expressed his gratitude to all the investors who invested in the state in the foundation stone laying and bhoomipujan of 1406 industrial projects worth Rs 80,224 crores. He also informed about the changed industrial environment and investment friendly policies of the state in the last five years. The CM said that recently under the leadership of Prime Minister Modi, eight years of the most successful Central Government had been completed. “The country has achieved new heights in every sphere of life in these eight years which also coincides with the occasion of Amrit Mahotsav of the country’s independence, ” said the CM congratulating the Prime Minister for this success.

Uttar Pradesh is fast emerging as a favoured industrial investment destination with its strong road connectivity and infrastructure. The transformation of the state had started in February 2018, when the government had organised the Investors’ Summit in 2018.

GBC-1: The first GBC as follow up to the Summit, was held on July 29, 2018 in the presence of the Prime Minister of India. In the first phase, investment proposals for 81 projects amounting to an investment of more than Rs 61,792 Crores were put on ground, which included investments by top companies in key projects. These included projects in the sectors of IT and electronics, telecommunication, energy and transport.

GBC-2: The initiative was given further momentum with the second ground breaking ceremony held on 28th July 2019. In this event, 290 projects with an investment of more than Rs 67,000 crore were launched. The sectors included telecom, IT and electronics, food processing, energy, healthcare and alternative sources of energy.

The success of the first two ceremonies has reinforced the reputation of Uttar Pradesh as an industry and investment-friendly state with the repeated investment by global giants in many sectors. In the last five years, sectors such as Information Technology and Electronics, Food and Food Processing and Infrastructure have seen massive investment by companies with a global footprint.

With Wamiqa Gabbi as Sivagami, a new plot for Bahubali: Before the Beginning on its way