Lucknow: The city of Lucknow gears up for the Islamic month of mourning which is observed by the Muslim brethren. As the holy month starts from tomorrow, a tight vigil will be maintained in an around sensitive zones so that peace and calm is maintained. A special watch will be ensured on Old Lucknow.

Upping the hawk eye vigil, police have deputed drones for the job.  The Police administration is keeping an eye on the drone movement.

In the meantime to make matters foolproof, DCP West did flag march with his police force. Further the PAC was also deployed along with the police force.

The city along with other parts of the  country will observe  Muharram on 19th August. In such a situation, strict security arrangements are being made by the Lucknow Police Commissionerate. The procession routes have been fully equipped with CCTV cameras for the day of Muharram. All the activities during the procession will be closely monitored through these cameras. Heavy police force has also been deployed towards Old Lucknow.

According to the information received, a special control room has been set up at Chowk Kotwali to avoid any untoward incident during the procession on the day of Muharram. Every movement of the procession will be closely monitored through CCTV cameras and drone cameras installed on the procession routes.

The DCP West has told the media that 9 vulnerable areas have been identified in old Lucknow. There, all kinds of activities happening on the day of Muharram will be monitored through drones. Along with this, 1600 policemen of Lucknow Police Commissionerate have also been deployed along with PAC and RAF contingents from security point of view in these identified areas.

There will be a presence of policemen on the roofs of the houses in nearby areas. According to the guidelines, only a maximum of 50 people will be able to attend the Majlis. No procession will be taken out. Senior Shia cleric has issued six-point guidelines regarding Muharram.

Darul Uloom Maulana Khalid Rasheed said that online programs will be held only. Ahle Sunnah Wal Jamaat has decided not to perform the procession in view of the Corona protocol and the guidelines of the government.

Despite the ban on the procession, there will be traffic diversion till late Wednesday night. DCP Traffic Rais Akhtar said that there will be a route diversion in view of security. The road will remain closed for vehicles from Pakkapul to Bada and Chota Imambara.

On the 10th Muharram, only two people go to bury the Tajiya. 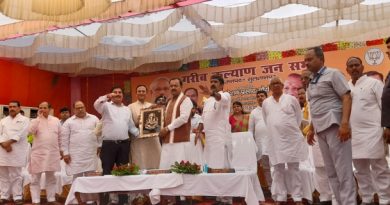