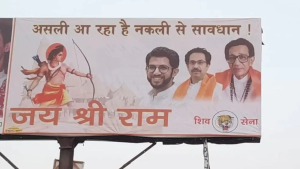 Ayodhya: The temple town of Ayodhya is best known for being a cradle of Hindutva given its history around the Ramjanmabhoomi movement. Suddenly as the important centre sees the Rama temple being constructed, it has once again witnessed a different kind of politics emerge. In what seems to be a surprising development  a poster war of Maharashtra leaders has started on the streets of Ayodhya. In Maharashtra, the ongoing tussle between the Shiv Sena and the Maharashtra Navnirman Sena (MNS) has now reached Ayodhya.

It is written on this poster that, ‘Raj Tilak ki Karo Taiyaari, Aa Rahe Hai Bhgwadhari.’ This poster was seen not only as a political challenge but also as an initiative to convey a message of Hindutva from Ayodhya in view of the manner in which Raj Thackeray has raised questions about the Shiv Sena government over the loudspeaker. In response, the Shiv Sena has put up posters in Ayodhya. The poster has pictures of Bal Thackeray, Uddhav Thackeray and Aaditya Thackeray and it is written that – ‘The real ones are coming, beware of the fake.’ In this poster, Raj Thackeray has been directly targeted.

With achievements clearly spelt out, Yogi in 2022 has his task cut out

The Power of being a True Blue Indori