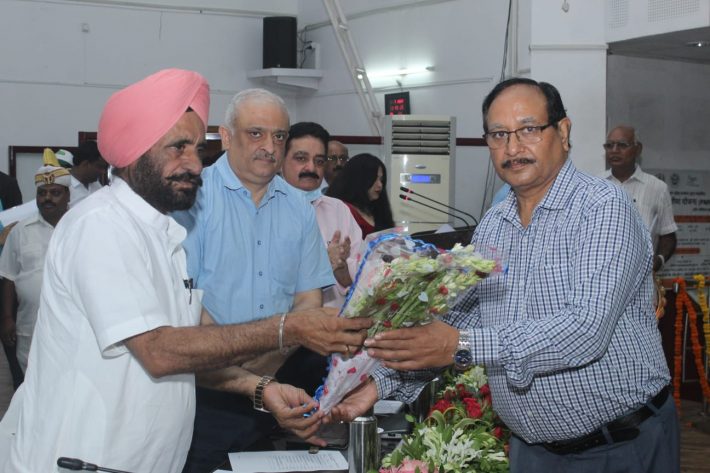 Crop Insurance week was inaugurated under the chairmanship of Minister of State for Agriculture Baldev Singh Aulakh.

In the direction of doubling the income of farmers, Pradhan Mantri Fasal Bima Yojana is an important pillar

Lucknow: Pradhan Mantri Fasal Bima Yojana Week program is being organized from July 01 to July 07, 2022 under the “Azadi Ka Amrit Mahotsav” campaign being conducted by the Government of India on the occasion of completion of 75 years of the country’s independence.

Aulakh said that the Pradhan Mantri Fasal Bima Yojana is an important pillar in the direction of doubling the income of the farmers and in keeping the income of the farmers stable at the time of calamity. It provides financial assistance to farmers by providing insurance cover to their notified crops against any kind of divine calamity. This scheme encourages farmers to increase production by using new technology, modern resources and advanced varieties of seeds in the agriculture sector. In this way, the insured farmer not only increases his income but also maintains the prominence of his contribution in the food security of the state and the country.

Dr. Devesh Chaturvedi, Additional Chief Secretary, Agriculture said that on the occasion of 75 years of independence of the country, under the “Azadi Ka Amrit Mahotsav” being conducted by the Government of India, from July 01 to July 07. I convey my heartfelt best wishes for the success of the Pradhan Mantri Fasal Bima Yojana program organized till 2022. With this, I extend my heartfelt congratulations and best wishes to the farmers who have adopted the Prime Minister’s Fasal Bima Yojana and expressing gratitude to them, I call upon all the farmers of the state to be covered under the scheme and provide protection to their crops from natural calamities. He was also told that the Prime Minister’s Fasal Bima Yojana has been made voluntary, farmers who do not want to get their crop insurance, should visit their bank branch 07 days before the last date of getting insurance under Kharif season.

An application for not doing it will have to be given, otherwise, the bank will insure the farmer’s crop by deducting money from his account. Along with this, the insurance companies have been directed to complete the survey of unsuccessful sowing, mid-stage compensation and applications received on personal basis and take action for compensation by completing the survey at a fast pace. Along with this, other compensation should also be made available to the farmers in time.

Director, Horticulture and Food Processing  RK Tomar, while explaining the effect of adverse weather on horticultural crops, called upon the farmers to get maximum insurance of their horticultural crops and Agriculture Director  Vivek Kumar Singh and Director, Agricultural Statistics and The program was addressed by Crop Insurance  Rajesh Kumar Gupta.

Leone Keeps her Sunny Side up at Chancellors Club in City

Masaba Gupta – The woman of the year

Lucknow:  Minister of State (Independent Charge) for Forests,  Arun Kumar Saxena said that Harishankari Week would be celebrated from August