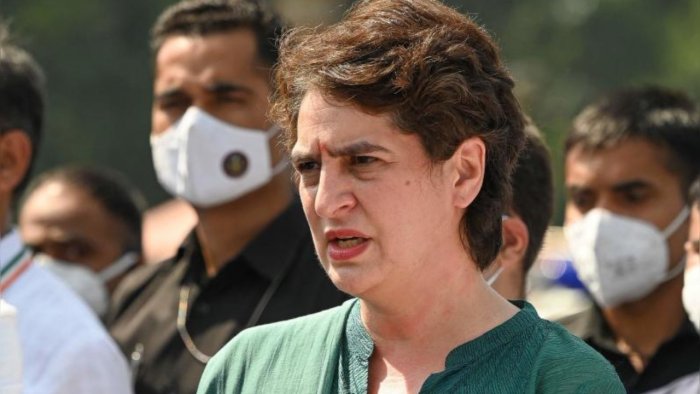 Lucknow: After the assembly elections in Uttar Pradesh, there is a constant churning  within the Congress. Taking lessons from the disappointing results in the UP elections, the Congress will now start preparing for the next mission. The first challenge before the Congress is to find a captain in UP who can overcome the challenges ahead. Congress had high hopes from Priyanka Gandhi Vadra, general secretary in-charge of Uttar Pradesh, but the results of the UP elections have left a lot of disappointment.

In 2019, Congress appointed Priyanka as the party’s general secretary in charge of UP (East) and Rahul Gandhi entrusted Priyanka with the responsibility of UP with great expectations.

Rahul Gandhi had said that he has challenged Priyanka in UP. He said, “My sister, who is capable and hardworking, will work with me. I am personally very happy and excited.” On the same day, Civil Aviation Minister Jyotiraditya Scindia was appointed general secretary in-charge of UP (West). However, Scindia left the Congress along with his supporters, resulting in the fall of the party’s Kamal Nath government in Madhya Pradesh in March 2020. After this, in September 2020, Priyanka was given the charge of entire UP.

Congress won one seat in the 2019 Lok Sabha elections

Priyanka was the first to face the 2019 Lok Sabha elections as the Congress General Secretary. The party won just one seat – that of his mother Sonia Gandhi from Rae Bareli. Rahul Gandhi party lost from Amethi. The party’s performance was poor compared to 2014, when both Rahul and Sonia won from their respective seats. However, she was not held responsible for the poor performance of the Congress as she took over the reins of the party in India’s most populous state a few months before the elections. However, Priyanka’s strategic skills were to be tested in the recently concluded UP Assembly as she had got ample time of three years for this.

The Congress contested the 2017 UP Assembly elections in a pre-poll alliance with the Akhilesh Yadav-led Samajwadi Party (SP). Out of the total 403 seats in the assembly, the party contested 114 seats and won 7. They got 6.25 percent of the votes. This time the Congress won just 2 seats and secured 2.33 per cent vote share – less than 4 seats and 3.92 per cent vote share compared to the previous state election. This despite the fact that the party first fought under the leadership of Priyanka Gandhi Vadra.

Congress leadership supported Priyanka even after the defeat

The Congress leadership has supported Priyanka despite the party’s almost disastrous performance. In-charge of Communications Department, General Secretary Randeep Singh Surjewala while talking to media persons said that in Uttar Pradesh, we were able to revive and revive the Congress party to the ground level in every village and every city of Uttar Pradesh, but, it is a fact. That the resurgence and resolute struggle that the Congress party has waged has not been converted into seats in this election.

The loss of polarization between BJP and SP

A top Congress leader said these results were expected of the party. He expressed satisfaction that the Congress stood second among the six constituencies. The senior party leader said, “The crowd at Priyanka’s rally could be compared with any other leader. There was frenzy all around her. Though we are not happy, we were prepared for the result as our internal The surveys had shown that we would get two seats. This was inevitable as the election had become polarized between the BJP and the SP and on communal and caste issues.