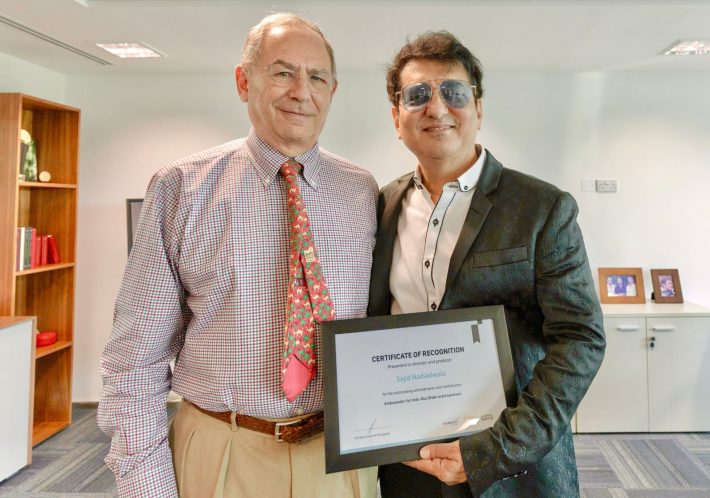 Mumbai: Making his country proud at the global level yet again, producer-director Sajid Nadiadwala has been recently bestowed upon the prestigious honour of being ‘Ambassador for Indo-AbuDhabi entertainment in Abu Dhabi under Mohamed Khalifa Al Mubarak for promoting Indo- Abu Dhabi Relations.

Adding yet another feather to his cap of innumerable achievements, the founder of Nadiadwala Grandson Entertainment, was felicitated with the ‘Certificate of Recognition Ambassador for Indo-Abu Dhabi Entertainment’ for his outstanding achievements and contribution under Mohamed Khalifa Al Mubarak for promoting Indo-Abu Dhabi Relations.

The felicitation was done under H.E. Mohamed Khalifa Al Mubarak. The award was presented by Mr Michael Garin, CEO of twofour54 Abu Dhabi and the Emirate’s media and entertainment hub. Adding on to the achievements of Sajid Nadiadwala, the Abu Dhabi Government also presented him a gold visa for his contribution.

Al Mubarak is a member of the Executive Council of Abu Dhabi, overseeing some of the Emirate’s most significant institutions across the culture, tourism, media, entertainment, and real estate sectors.

Sajid Nadiadwala says, “It is an honour to receive this prestigious recognition from His Excellency Mohamed Khalifa Al Mubarak. On behalf of Nadiadwala Grandson Entertainment, I would like to thank everyone who made this possible. Our experience in Abu Dhabi has been and continues to be wonderful. We look forward to showing India the beauty of Abu Dhabi through our movies.”

Among the distinguished dignitaries present at the event to witness the historical movement of Indo-Abu Dhabi relations included Mr. Hans Fraikin – The Head of Film Commission of Abu Dhabi, and the founder of Red Films – Bushra Mahdi.

Representing the Indian Entertainment Industry internationally is truly a matter of great pride. Previously he has also won the Volare Award which felicitates filmmakers who played a key role in fostering the India-Italy friendship. He is also been conferred France’s prestigious Chevalier dans l’Ordre des Arts et des Lettres (Knight of the Order of Arts and Letters) award for his contribution towards influence of arts in France and throughout the world.

Sajid Nadiadwala and his team are currently working on various projects to collaborate with Abu Dhabi.