To make Christmas and New Year’s Eve memorable, Lucknow Metro has also organized a musical band performance at Hazratganj Metro Station. Band performance will be held on 25 December 2021 and 01 January 2022 at Concourse Area, Hazratganj from 6 pm onwards. The Hazratganj Metro station, situated in the heart of the city, is going to be specially decorated on Christmas which will be the center of attraction for the youth and children.

Apart from this, an art and handicrafts exhibition is also being organized at Hazratganj metro station on 24th and 25th December. Uttar Pradesh Metro has always come forward to promote small and medium businesses, in this sequence, in association with UP Metro Artifact Bazaar, handicraftsmen have been invited to hold art exhibitions by setting up stalls at the metro station between 11 am and 8 pm.

UPMRC in association with Samridhi Association today took 14 special children for a walk from CCS Airport to Badshah Nagar Metro Station. Children celebrated Christmas dressed up as Santa and their faces lit up with the subway ride.

UP Metro has run a donation drive to take the happiness of New Year and Christmas to the needy people. With the concerted effort of UP Metro, Sarthak Foundation and BigFM, donation camps are being run at Munshi Pulia, Vishwavidyalaya, Charbagh and Krishna Nagar metro stations till December 31, 2021 where people are generously donating warm clothes, blankets etc.

Kumar Keshav, Managing Director, UPMRC said that “Lucknow Metro’s relationship with the residents of Lucknow today is not limited to just providing safe, smooth and convenient travel, but by celebrating the festivals with the commuters by cherishing the city’s culture, we celebrate their hearts. Making a special place in the highest ever services offered by Lucknow Metro will continue to remain the same and we are constantly striving to make it even better.” 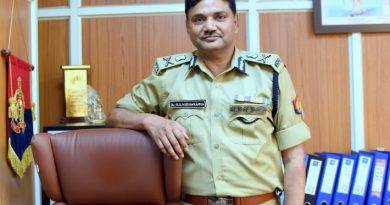 Full faith in the youth that they will uphold the dignity of the forces: Dr. RK Vishwakarma