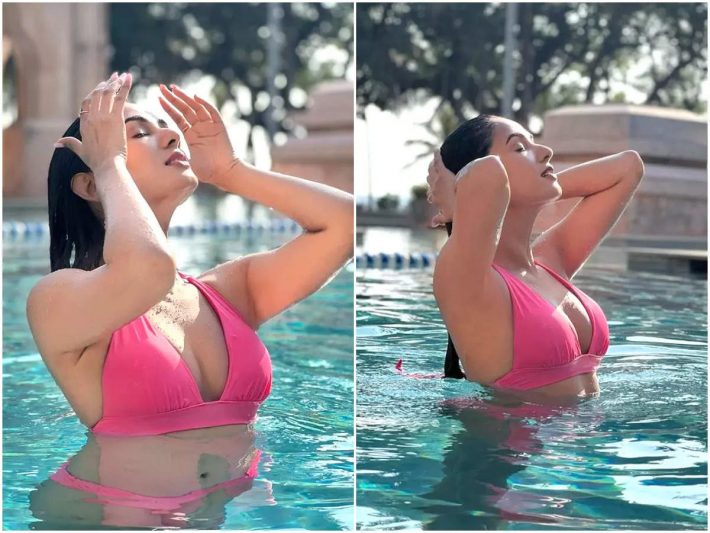 Mumbai: Actress Sonal Chauhan, who has worked in the film ‘Jannat’, will soon be seen in the film ‘The Ghost’ with South’s superstar Nagarjuna. Sonal recently shared some of her pictures on Instagram, in which she is seen taking a dip in the pool wearing a bikini. In the pictures, Sonal Chauhan is seen flaunting her hair in a pink colored bikini. Fans are commenting fiercely after seeing the gorgeous photo of Sonal.

Sonal Chauhan has shared three photos of her in bikini. In these photos, Sonal is seen flaunting her toned body. Seeing Sonal like this in the swimming pool, her fans are commenting fiercely. A person asked very innocently – do you not feel cold? At the same time, another person said – Hey come out, it will be cold. At the same time, a person said – you have to study man, show your hotness in the evening. One said – Seeing them, I cannot believe that paradise had come 14 years ago.

These pictures of Sonal Chauhan have been clicked by her sister Himani Chauhan. Sharing these photos, Sonal wrote – Everywhere only water is water. Please tell that Sonal was first seen in Himesh Reshammiya’s album ‘Aap Ka Suroor’. However, she made her Bollywood debut in 2008 with the film ‘Jannat’ opposite Emraan Hashmi. Sonal has worked in many films till now. These include 3G, Legend, Lion, Size Zero, Dictator, Paltan, Jack and Jill, Skyfire, Ruler, The Power and Fun and Frustration.

Sonal will be seen with Nagarjuna in The Ghost
Before Sonal Chauhan in The Ghost, actress Kajal Aggarwal was supposed to play this role. However, Kajal refused to do this role due to pregnancy. Later, Jacqueline also got this role, but after the actress’s hefty fees and her name surfaced in the money laundering case, the makers finalized Sonal Chauhan. Sonal will be seen opposite Nagarjuna in the film.

25 June Horoscope: Your Luck for the day

Not so dignified situation for the dead in Barabanki