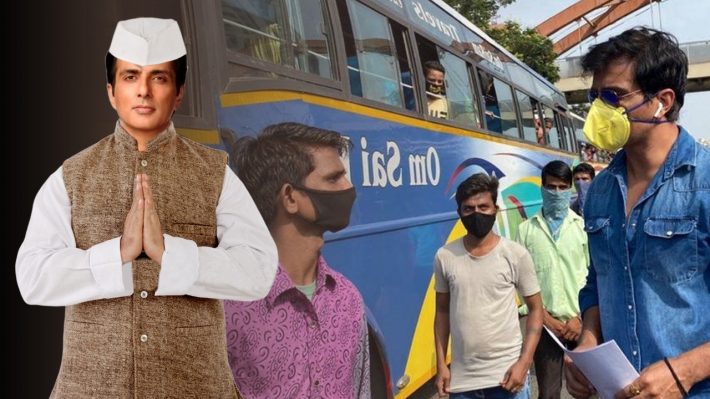 As one of the most kind anti-heroes of Bollywood, Sonu Sood has never failed to show his incredible acting talents on the silver screen. But during this pandemic scenario, we got to see a different picture. Sonu Sood grabbed headlines during the pandemic for his philanthropic efforts to help migrants and the vulnerable. The star, who aids migrant workers in the first phase of a pandemic now, has concertized his efforts to help people in need who have lost their jobs during the pandemic & those waiting for surgeries.

Suffice to say, Sonu has attained the status of ‘Messiah’, and helped set an example for many of his ilks to follow suit. It is said that a person is recognized for his deeds. It is the desire of almost every Indian that Sonu should continue doing these noble deeds in the future. But, with all the speculations of him entering politics under the guise of his family, his fans may lose their, ‘Messiah’.

Sonu’s decision to enter politics after bringing his sister into political turmoil remains a matter of discussion. Although he always refused to go into politics, it is speculated that Sonu is stepping into this field by forming his party. In many interviews, Sonu denied joining any political party. But ahead of the 2022 polls in Punjab, he refuted his statements and got his sister, Malvika Sood entered into the battle for power. The duality of his statements has made many people theorize that Sonu is on his way to knock the door of politics.

Were all his philanthropic measures just a medium to help him enter into politics? Why would he choose a path that has been in the dock of debate for many years? The questions remain unanswered. At present, good-hearted deeds are taken as blessings, but after coming to power, will he be able to continue the same? All his good efforts may be considered as a result of his greed just to make his party win. If he lost his image once, it will be very hard to get it back. Therefore, as an image consultant, I request Sonu Sood to ponder thoroughly on his decision to enter the political scenario. Before falling into this political quagmire, he must think twice.

Development of futuristic technologies must for overall development: Rajnath Singh

Badshah’s Pani Pani now to get a Bhojpuri remake