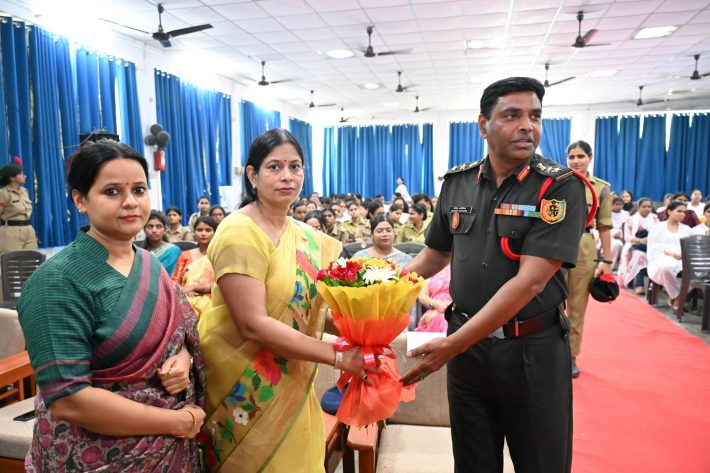 Lucknow: At Avadh Girls Degree College, Lucknow under the joint aegis of the unit and the Department of Physical Education and under the direction of Lieutenant Dr. Sarita Singh, a lecture was organized on the 23rd Kargil Vijay Diwas under the Azadi Ka Amrit Mahotsav  in which U.P. Colonel Dinesh Kanojia, Commanding Officer of 19 Girls Battalion was present.

The program started with lamp-lighting and Saraswati Vandana, after which the principal of the college, Prof. Bina Rai presented the welcome address. On this occasion, a video was shown to the girl students on Operation Vijay of Kargil, after which N.C.C. The cadets made everyone present in the auditorium emotional by presenting a collective dance drama based on patriotism, while cadet Kanika Shukla paid tribute to the martyrs by reciting a patriotic song.

After this, Sergeant Stanzing shared his experiences related to the difficulties of fighting in the middle of the glacier in the valley and the ways to overcome them.

Chief guest Colonel Dinesh Kanojia told that he was in Kargil at the time of Kargil war, so to this day he remembers that time completely. He told the students that they should keep fighting for their rights and rights without giving up under any circumstances. Hearing his experiences related to the Kargil war, everyone was mesmerized and filled with the feeling of patriotism. He told the students that for how many times we had to fight hungry in the valley, so I want to give this message to everyone that we should never insult food. Here we are throwing food and there our soldiers remain hungry and engaged in the service of the country.

After the vote of thanks by Lt. Dr. Sarita Singh, the program ended with the national anthem.