The use of stem cells for treating lung diseases has great appeal. Much is known about the therapeutic potential of stem cells and other cell therapies in clinical trials of non-lung diseases, and much work is being done on using this technique in lung diseases. Dr BS Rajput, a consultant orthopedic surgeon and stem cell transplant surgeon practicing for the last 35 years, says that patients of lung fibrosis as a result of severe Covid-19 infection can lead a normal life with stem cell therapy. The treatment shows improvement even in cases where standard pulmonary procedures have failed to provide relief.

Dr Rajput is a visiting professor at and alumnus of GSVM Medical College, Kanpur. He said during a recent visit to Lucknow that Stem cell therapy is already being used in the treatment of neurological and motor neuron diseases such as cerebral palsy and autism. He shared the details of a 52-year old patient from Lucknow who was admitted in hospital for several months with interstitial lung disease and was on oxygen support of 2 litres per minute for 24 hours. She had been suffering from lung disease since 2016, but never needed oxygen support. However, after contracting Covid in April 2021, she developed lung fibrosis and needed oxygen round the clock.

Dr Rajput said that after stem cell transplant from her own bone marrow at a local hospital, the patient improved significantly and now needs oxygen for about 18 hours and at 0.5 litres per minute. The requirement is expected to reduce further with subsequent sessions.

Dr Rajput performed the procedure and has in-depth experience in treating a range of medical conditions using Stem Cell Therapy. He says this therapy can improve the quality of life of several patients with compromised lung function, but the high cost of the process can be a deterrent, he said.

Dr Rajput heads the Stem Cell Research Centre in New Delhi and is a visiting surgeon in a Lucknow hospital. He has been trained in orthopaedic surgery and stem cell transplantation at various national and international medical centres of repute. He has also received specialised training at Royal Liverpool University Hospital, Liverpool, U.K.In the last 10 years he has developed and established Stem Cell Transplantation as a new branch of medical science in India. He has also the credit of performing more than 4000 stem cell transplants till date.

He is also the pioneer in bringing other cell-based therapies like T-Cell Immunotherapy and Dendritic Cell vaccine in India for resistant cases of Cancer where Chemotherapy and Radiotherapy has failed.He is founder Vice President of Stem Cell Society of India and was Organizing chairman of 3rd international Conference of Stem Cell Society of India, SCSICON 2016 New Delhi.

Saying ‘ I Do’ in Destination Lucknow 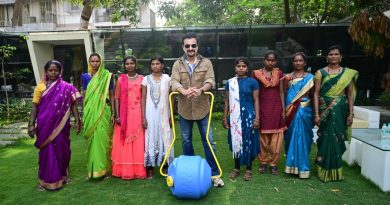 Sanjay Kapoor associates with the NGO Wells On Wheels