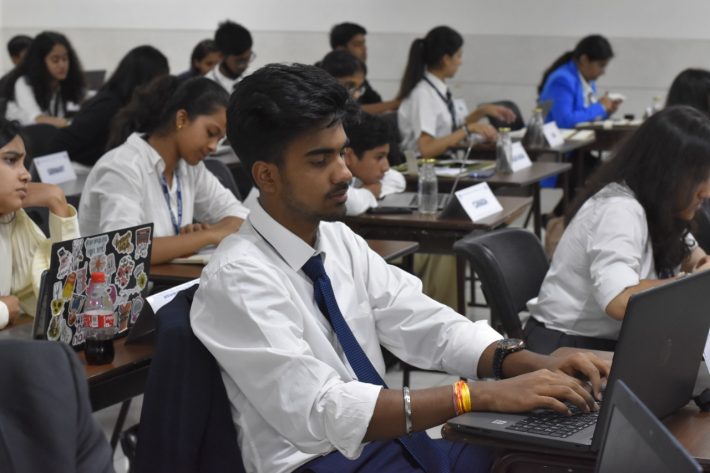 Lucknow:  A delegation of eight students from Seth Anandram Jaipuria School represented their school at a pan-India Model United Nations Conference organised by Jayshree Periwal Global School, Jaipur, on 14-15 July 2022. The conference witnessed delegates from the most prominent schools in India- Mayo College (Ajmer), Welham Girls’ School (Dehradun), to name a few. The school was host to 500 competitive participants.

Seth Anandram Jaipuria School also  shared that four of its students, Abhinav Singh (class XI), Abhiveer Singh (class XI), Devang Tiwari(class XII) and Siddharth Kanodia(class XII) were awarded a Special Mention for their performance in the MUN. The principal, Ms Poonam Kochitty, expressed her happiness on this achievement and said, “I am delighted to see our children performing so well at a conference that is hosting some very long- established and prominent institutions of the country. I am pleased to witness that the school has grown immensely in just six years of its inception and such achievements by our students attest to the momentous growth of Seth Anandram Jaipuria School, Lucknow.”

Siddharth Kanodia was awarded a special mention in the category of International Press(Photography). When asked about his experience, he said, “The experience from JPGS MUN improved my sense of self-confidence and self-belief. I was happy to explore my strengths as a photographer. We met some amazing people from all over the country, and I was taken aback by their zeal. I am honoured that I could be a part of this, and I certainly owe this to my school.”

Another awardee of the special mention, Abhinav Singh, added, “The experience was one of its kind as we competed against such talented students. It was enlightening to be a delegate on a committee that discussed the issues within the LGBTQ community.

The students of SAJS Lucknow, left their mark on almost every committee at the JPGS MUN with their exceptional research and public speaking skills. The teacher-in-charge for this MUN, Ms Gurpreet Kaur, mentioned, “The students of Seth Anandram Jaipuria School stood out from all because of their critical thinking skills and distinctive problem-solving approach towards the issues in discussion, something that we strive to ingrain in all children.”