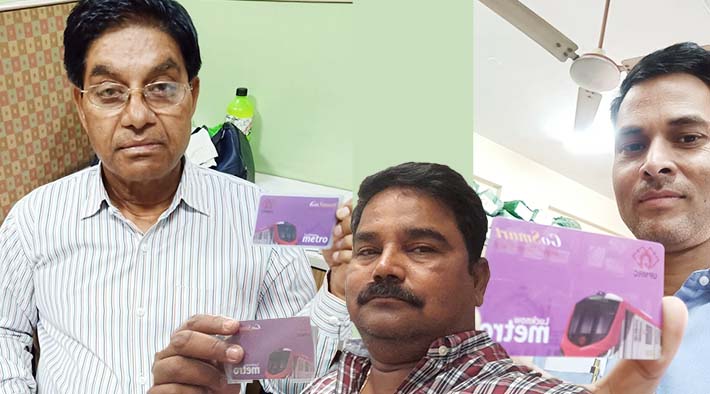 Lucknow: The initiative of Uttar Pradesh Metro Rail Corporation to provide world class travel to its passengers with super saver card at an affordable price is proving to be successful. On May 17, 2022, the Super Saver Card of Lucknow Metro was launched by Shri Durga Shankar Mishra, Chief Secretary, Uttar Pradesh. Since its launch around 800 Super Saver Cards have been bought by commuters in just 8 days which shows its popularity.
With the Super Saver Card of Lucknow Metro, now passengers are enjoying the benefit of unlimited metro travel for 30 days in just Rs 1400. A regular commuter Mr. Anil Kumar Shukla said that earlier he had to spend Rs.90 on to and fro journey from Alambagh to Indira Nagar. After the introduction of Super Saver card, his travel expense is cut short to almost 50%. Another metro passenger Shri S.K Srivastava while sharing his experience of newly launched Super Saver Card said that earlier he had to spend around Rs.2000 on his monthly journey between IT and Transport Nagar while now he is comfortably travelling in just Rs. 1400.

Ms. Divyanshi Singh one of the Metro commuters told that she will be able to save around Rs.400 to Rs.500 a month with the Super Saver Card. Many commuters while sharing their feedback said that with the help of Super Saver card their family members can also enjoy the Metro ride for the whole month using the same card.

Commuters told that when any member of their family has to travel in metro, they too can easily travel metro using the same Super Saver card.

Kumar Keshav, Managing Director, Uttar Pradesh Metro Rail Corporation Ltd said, “This card offers unlimited travel to the commuter which is itself a special gift to the people of Lucknow. The purpose behind launching this card is to encourage people to use this world class urban mobility system which is safe, secure and comfortable & eco-friendly”.

Ashes of Pt. Birju Maharaj immersed in river Gomti amidst sounds of Bhajans