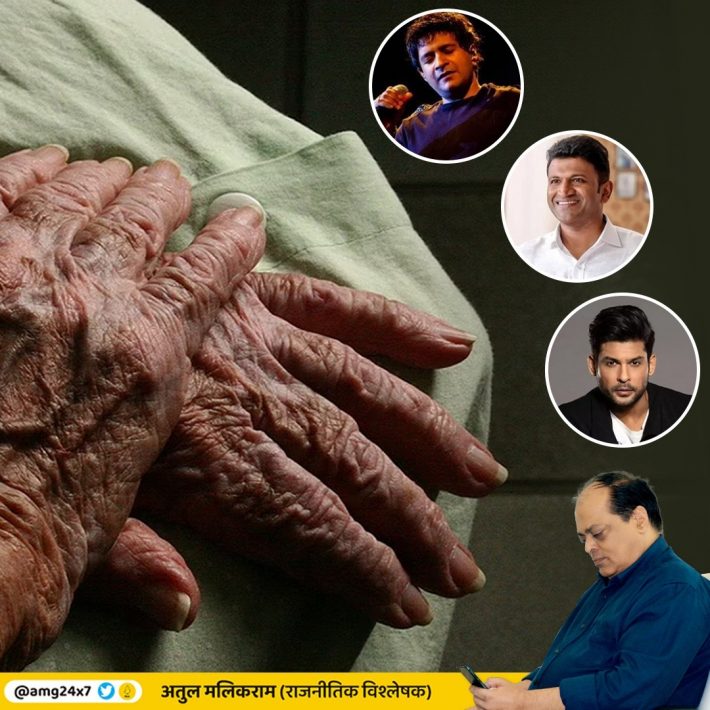 Mumbai: ‘KK’, the best singer and illustrious personality, who recently passed away due to a heart attack at the age of 53, actor Siddharth Shukla, who looked perfect last year, 40-year-old and Kannada film superstar Puneeth 46-year-old. Rajkumar are some such names, which have entered my mind so deeply that now I have little faith in life.

A strange restlessness strikes again and again in the heart, that how did death knock so quickly in the lives of these physically fit persons. Although this would happen to many people in ordinary life, when they would be forced to say that such a person was perfectly fine till yesterday, how can he leave the world.

Thousands of unfulfilled dreams kept on the wheel and the pain of not being able to take their last breath in front of the family. After taking life, remembering God, she wished to go to the afterlife. In some corner of his room, the wooden box that had been lying dusty for years is still in my mind, when the whole family was seated near him, the grandson was made with his own hands, the elder daughter-in-law’s girdle, the younger one was fond of dancing. The love with which she used to give paganis to her granddaughter, if true, even the wealth of crores was faded in front of her. After crossing the long stage of age, with a trembling body, happy in a year-old handkerchief with attentive print in the waist, while opening the lock of the chest with that key, the necklace given for worshiping the feet of the daughter-in-law of the daughter-in-law of her brother-in-law’s eldest son He also remembered well.

That sixteenth chapter of the Gita, all the children and grandchildren sitting at the head, how comforting it must have been to wish to die in front of the whole family! By handing over all the responsibilities to the children, the elders of our house used to take the resolution of the journey of Char Dham and cow donation. Today, when I see people wandering in this maze of dazzling world, I find that where is that peace now? Where are those panties, those girdles now? Where is that chest and that long life now?

Nowadays the pattern of death has changed. Now death does not give an opportunity to hear and recite the sixteenth chapter of the Gita. Now the means of going in front of the son and daughter-in-law laughing and chatting is not seen to be fulfilled. Many people are going to such a young age that the pleasures of daughter-in-law, son-in-law, grandson, grandson have become a dream like touching the moon. Nowadays, death is so angry with life that it is not even giving a chance to meet the family members for the last time. My mind then fills with remembering the reality of KK, Siddharth and Puneet. Life did not even give him such a chance that he would say something to his parents, wife, friends for the last time. Nor did he remain ill for two or four days that he would have realized anything.

I think that what is the use of money earned by running, forgetting one’s own pleasures and desires, when the life once received cannot be lived comfortably. Be it age or more, in the end only behavior has to go together, so why not laugh and meet everyone. You are also requested to come inside by shaking the wet grievances in your mind on the threshold of the house; End today’s talk today; Whoever you meet, meet only with love; Forgive today’s mistakes today; Do not leave your dreams to tomorrow, because we do not know whether there will be tomorrow to fulfill them; Do not get separated from anyone; Do not make anyone sleep; Do not feel nobility by humiliating someone; Do not put pressure on someone, taking advantage of someone’s position; May be that person is not present to hear our apology till he realizes his mistake, then to whom will he apologize, whom will he listen to and whom will he tell..

Keep your mind generous; Do not take small things to heart; Of course, do not get hurt and deceived by anyone, but do not get so tight that even those who come in contact with us yearn to hear two words of love from us. If we leave like this, then our final picture will not be beautiful even in taut brows and taut mustache. Do think, tomorrow we may not be in the game..

Municipal Corporation gears up for a COVID hospital for public service