Mumbai: Today, as a woman, I owe my privilege to the pioneer of Women’s education in India, the Dnyanjyoti, Krantijyoti, Savitribai Phule. One can speak and write volumes on her sacrifices, tribulations, she underwent only to lead the people of India, particularly women from darkness to light. She and her life partner, Jyotibaphulehave done the historical work of building a holistic and integrated revolutionary cultural, social and educational movement of women, for which the entire feminist fraternity will be indebted today and always.

She was born on 3rd January, 1831 at Naigaon in Satara District.  On the occasion of her 192nd Birth Anniversary, a brief on her achievements…..

Savitribai Jyotirao Phule was born in a farmer’s family on January 3, 1831 at Naigaon in Satara District. She was the eldest daughter of mother Lakshmi and father Khandoji Neveshe Patil. In 1840, at the age of 9, she was married to Jyotirao, who was only 13 at that time. After marriage Savitribai and Jyotiba settled down in Pune.

Speaking on one of the incidents, before her marriage, when Savitribai scrolled one of the English books, her father got angry and threw away the book out of the window. For, in those days, education was meant only for the urban upper class men only. However, she made a resolute to learn one day.  After marriage, she could realize her dreams.  Jyotirao educated his wife at home and trained her to become a teacher. Further, the responsibility of Savitribai’s education was taken up by Jyotirao’s friends Sakharam Yashwant Paranjpe and Keshav Shivram Bhavalkar (Joshi). Savitribai also took teacher’s training at Ms. Farar’s institute in Ahmednagar and in the Normal School of Ms. Mitchell in Pune. Jyotirao Phule and Savitribai had endured the ravages of caste, tradition and illiteracy. For this, he took a vow of lifelong social service to bring about a radical change in the society.

Savitribai Phule is the first Woman teacher and Head Mistress of the first women’s school in India.She fought relentlessly against all the odds- be it the dominant caste system or revolting against education, widow remarriage, social emancipation, women’s rights. She worked towards the upliftment of the marginalized.It is her struggle and story that marks the beginning of modern Indian women’s public life in India.

Engaged in a passionate struggle to build a movement for equality between men and women and to fight against the caste system, the couple dedicated their lives spreading education and knowledge.They opened 18 schools for girls and the first girl’s school was opened in 1848 at Bhidewada in Pune.

They started their first school in Pune and the ‘Native Library’. For this noble cause, she cooperated with her husband completely and along with him, faced all the trials and tribulations that came their way.

She demanded dignity for all women. The principles of humanity, equality, liberty and justice were of utmost importance to her. During a time when women were mere objects, she ignited a spark that led to equality in education – something which was impossible before.

She strongly spoke against the discriminatory boundaries imposed on women, which led to their oppression. Her struggle for emphasis on secular education for social emancipation in India, has not only changed the face of education in India, but also enlightened humanity in its real essence.

In 1852, Savitribai started a women’s rights organization called Mahila Seva Mandal and organized a successful barber’s strike to protest the malpractice of shaving widow’s heads. In 1863, she and Jyotiba started a ‘home for the prevention of infanticide’ in their own house, to ensure the safety of pregnant and exploited widows. They also formed the Satyashodhak Samaj in September, 1873 to focus on the rights of depressed groups such as women and under privileged people.This organization (Society for Truth Seeking), initiated the practice of marriage without dowry or overt expenses. They were against child marriage and supported widow remarriages. They had no children of their own but adopted a child of a Brahmin widow, named him Yashwantrao, educated him and made him a Doctor and arranged for an inter-caste marriage for him.

They insisted that ‘education should give one the ability to choose between right and wrong and between truth and untruth in life.’ They took special efforts to create spaces where the creativity of boys and girls could bloom.

Savitribai’s struggle was fraught with many difficulties and despite that she continued her work peacefully. Men would intentionally wait on the streets and pass lewd remarks on her. They sometimes pelted stones and threw cow dung or mud at her. Savitribai would carry two sarees when she went to school, changing out the soiled sari once she reached the school, which would again be soiled on her way back, and yet, she did not give up. The guard, who was then appointed for her, wrote in his memoirs about what she would say to those men, “As I do the sacred task of teaching my fellow sisters, the stones or cow dung that you throw seem like flowers to me. May God Bless You!”

Great revolutionary, Jyotirao passed away on November 28, 1890.Breaking all the traditional and conventional norms, Savitribai lit the funeral pyre. She courageously came forward and held the earthen pot (it is supposed to be carried by the successor of the deceased). She led the final journey of Jyotirao and consigned his body to the flames. In the history of India, this was probably the first time a woman had performed death rituals. She also erected a ‘Tulsi Vrindavan’ with his ashes on the spot where Jyotirao desired to be buried. After his demise, she led the Satyashodhak movement till the very end of her life.  She was the chairperson of the Satyashodhak Conference held in 1893 at Saswad, Pune.

What we must remember

Savitribai, along with Mahatma JyotiraoPhule, fought for the rights of women, peasants, and for social equality of castes. Savitribai fought against the totalitarianism of the caste system and other social evils all her life. She raised a strong voice for gender equality.

Savitribai, An Author And a Poet: Her valuable contributions

Savitribai Phule wrote poetry emphasizing on the need for education and the oppression faced by marginalized castes. Her poems and other writings continue to be an inspiration for many. She has penned down the struggle against India’s caste system. Her inspirational writings include, Kavyaphule- Collection of poems, 1854, Jyotirao’s Speeches, Edited by Savitribai Phule, Savitribai’s Letters to Jyotirao, Bavankashi Subodh Ratnakar in 1892.

The year 1897 dawned with the menace of bubonic plague. People were dying in hundreds daily in Pune. The government tried to control the epidemic under the leadership of British Officer Rand. Savitribai along with Yashwant set up a hospital to take care of the patients. She would herself pick up sick people and bring them to the hospital and get them treated. Even though she knew that the disease was contagious, she continued to serve them till the plague took her own life.

A young boy outside the village of Mundhwa was afflicted with plague.She carried the sick child on her back and rushed to the hospital. She caught this contagious disease and succumbed to it on March 10, 1897. And the great revolutionary’s era came to an end.  Her legacy has been memorialized with Statues, Stamps, Universities, Postage Stamps and in books and films.

Women’s education in India is indebted to the tireless works of Savitribai Phule.  Today, we are enjoying the fruits of her struggle, the liberty of having a structured education.  I pay sincere gratitude towards her struggle, contributions and sacrifices. Her name will always be scripted in gold in the pages of Women Empowerment History. 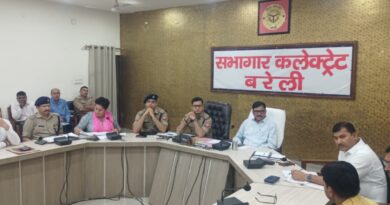 Animal fair should not be organized: District Magistrate Sweeping changes in U.P. BJP expected in runup to Mission 2024