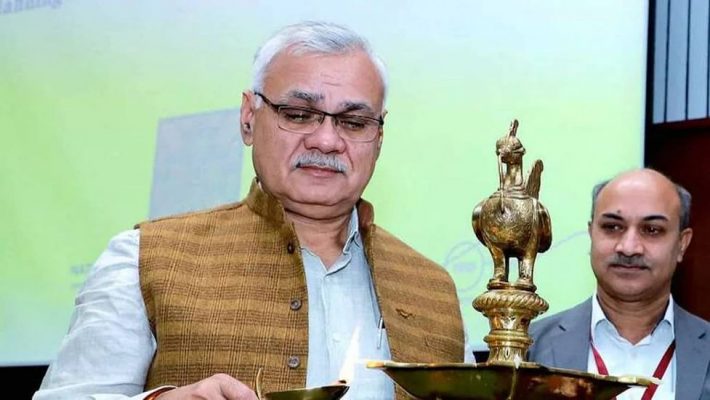 Lucknow: Uttar Pradesh Chief Secretary Durgashankar Mishra made a surprise inspection of the Integrated Command and Control Center at Lalbagh. He took information from the personnel posted in the center regarding their work performance etc. He interacted with the personnel and doctors posted there on what kind of guidelines are being given to the patients of Covid. Along with this, the Chief Secretary also interacted with two Covid patients through the existing Dr. Seema Singh there.

Chief Secretary Mishra said that along with providing medicine kits to the patients of Covid, they should also be given complete information about how to take medicine and their full help should be given. He also got information about the ambulance system to take the Covid patients to the hospital. On this occasion, Divisional Commissioner Lucknow Ranjan Kumar, Municipal Commissioner Ajay Dwivedi and senior officers of Medical and Health Department were present.

Chief Secretary Durgashankar Mishra also did a surprise inspection of the Smart City office located at Lalbagh. On this occasion, he also saw the Integrated Traffic Management System operating the traffic system of the city. During this, the Chief Secretary also saw the operation and supervision process of street lights, Wi-Fi center and  garbage collection vehicles and directed the officials to make the children aware about the Hi-Tech Transport System (ITMS). H said go and study tours should also be made for school-college students.

The scientists of the institute told the Chief Secretary that the model of mixed farming is being prepared. This can lead to a qualitative increase in the income of the farmers. Thereafter, the Chief Secretary also inspected the Krishi Vigyan Kendra located in the campus. The machines used in farming were seen, where farmers are given information about the machines that do more work in less cost.

The scientists of the institute also showed the super seeder machine which can sow without tillage, through this device farmers can sow the seeds of wheat, pulses and oilseeds without tillage. He also got information from agricultural scientists about how vegetables and mushrooms can be cultivated at home.

After the inspection, the Chief Secretary directed to connect the farmers directly with the advanced agricultural technology so that its benefits could reach the common farmer. On this occasion, he also planted trees and fed jaggery to the cows with his own hands. Additional Chief Secretary Agriculture Dr. Devesh Chaturvedi along with senior scientists of the institute, agricultural experts, senior officers etc. were present during the inspection and visit.