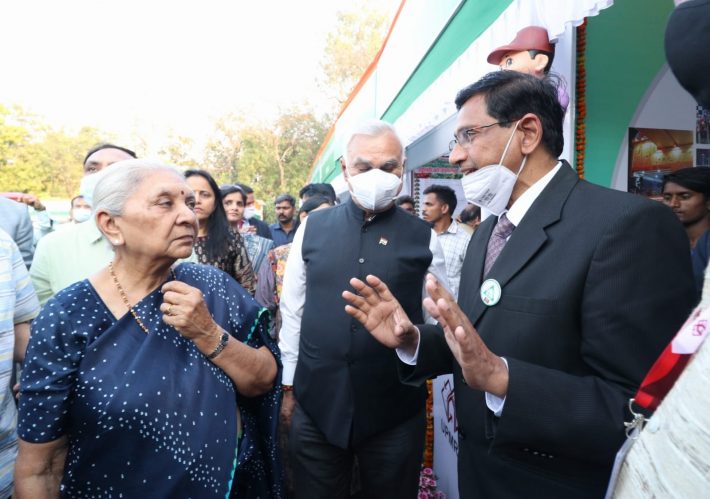 Lucknow:  Governor  Anandiben Patel visited the stall of Uttar Pradesh Metro Rail Corporation in the regional fruit, vegetable and flower exhibition at Raj Bhavan. On this occasion, Chief Secretary, Government of Uttar Pradesh,  Durgashankar Mishra, Director (Operations) of UP Metro,  Sushil Kumar and senior officers of Metro were present. Like every year, this time also Uttar Pradesh Metro is participating in a three-day flower show, which was inaugurated today by the the Hon’ble Governor of UP.

UP Metro has won several awards for floral decoration and horticulture design at Raj Bhavan Flower Show over the years. This time also the Horticulture Department of UP Metro has participated in various sections of the exhibition, which is getting a lot of appreciation from the people. This year UPMRC is showcasing the journey of Lucknow Metro and apart from this information about the progress of construction work of Kanpur and Agra Metro projects is also available at UPMRC’s stalls. Souvenirs like Metro Toy Train, Clock, Pen etc. available for sale at this stall are also becoming very popular.

From its inception, UP Metro has worked dedicatedly towards nature and greenery. As a result of this, 34,000 square meters of greenery has been developed by Lucknow Metro and 14,000 square meters by Kanpur Metro. Every year 2 lakh liters of rain water is conserved. Zero discharge facility has been made in the depot of UP Metro i.e. such arrangement has been made that no polluting element is emitted outside. Plants have been set up to treat the contaminated water and re-use it. Not only this, the tobacco products received from the passengers during the journey by metro are being converted into manure from the compost machine and it is being used to make the city green.

Kumar Keshav, Managing Director, Uttar Pradesh Metro Rail Corporation has appreciated the artistic flower show of Horticulture Department. Regarding the information given in the Metro stall,  Kumar Keshav said that this year’s exhibition will not only give information about the year-long journey of Lucknow Metro, but will also make aware about the plans of Uttar Pradesh Metro.