Lucknow: Under the chairmanship of Women and Child Development Minister Swati Singh, the schemes run under the Department of Women and Child Development were reviewed. Special instructions were given on Chief Minister Kanya Sumangala, Nirashrit Mahila Pension, One Stop Center, Beti Bachao Beti Padhao, Child Protection Services and Bal Sewa Yojana and others. She gave tips to Deputy Chief Probation Officers / District Probation Officers for active implementation of schemes. Instructions were given to strengthen the rejuvenation and maintenance of children’s homes.

In order to benefit maximum number of beneficiaries in the pension of destitute women after the death of husband, the applications of all the eligible beneficiaries should be completed by organizing camps at Tehsil / Block level every 15 days, Singh said. Publicity should be made regarding the setting up of camps through media and other means and requisite cooperation of public representatives should be obtained.

While reviewing the Chief Minister Kanya Sumangala Yojana, the 10 districts with the least progress were alerted and directed to improve the progress. In the meeting, the top 10 districts were told that the target set for them is less and more efforts are required. Along with this, demanding clarification from the 10 worst performing districts, they were directed to improve the progress in the next one month. The department apprised that the work of construction of building of One Stop Center has started in 52 districts. On which all the district probation officers were directed by Swati Singh that the construction work of One Stop Center building in all the districts should be compulsorily completed in three months.

During the review of 181 Women Helpline Scheme, instructions were given by her that various schemes of Women Welfare Department like 181 Women Helpline, Beti Bachao Beti Padhao etc. should be branded on lines of 112-U.P.
Swati Singh directed the district officials to establish communication with all the sections of the society such as village headmen and other public representatives, teachers, prominent people of different religions and students to take the message of Beti Bachao Beti Padhao to the people.

She said online programs should also be organized for this. Under this scheme, a big event should be ensured in the district every month. Under the Uttar Pradesh Mukhyamantri Bal Seva Yojna, such eligible children/girls suffering from Covid-19 whose mother or father have died due to corona, were made aware of distribution of funds under Mukhyamantri Bal Seva Yojna to such eligible beneficiaries.

On which instructions were given by Swati Singh that the pending applications received under the scheme should be approved by the District Task Force within 15 days and immediately the amount should be sent to the account of the beneficiaries. Swati Singh directed that the beneficiaries to whom laptops are to be given under Mukhyamantri Bal Seva Yojna should be distributed by organizing special events and public representatives should also be invited in the said program. It was decided to fix the program for distribution of laptops while conducting a program in the entire state.

Director Women Welfare Manoj Rai said that Mukhyamantri Kanya Sumangala Yojana is the highest priority scheme of the Uttar Pradesh government. After the death of the husband, the applications of Mukhyamantri Kanya Sumangala Yojana should also be filled in the camps to be set up under the Destitute Women Pension Scheme. He said that all the district officers should become active and like the child service scheme, they should also promote other schemes and work on a time bound action plan to achieve the given targets.

During the review by Principal Secretary, Women and Child Development Department V Hekali Jhimomi, instructions were given to the District Probation Officers that all the District Probation Officers must inspect the institutions in their district at least 02 days a week. He said that making full use of the funds allocated from the Directorate for the rejuvenation and maintenance of the institutions, the institutions should be strengthened immediately and special arrangements should be made for furnishing and cleaning etc.

Arrangements for children’s play and entertainment should be ensured immediately. It was emphasized by him that there is a need to make more efforts on the promotion of Mukhyamantri Kanya Sumangala Yojana. In this, the cooperation of public representatives like MP, MLA, District Panchayat President, Block Pramukh etc. should be taken. Camps should be organized at the level of each gram sabha and block for the purpose of disseminating the scheme and receiving applications, about which the reach of the common man should be increased by spreading full publicity through public representatives and media at all levels. To popularize the schemes, it is necessary to reach the last person of the state.

Metro Man Kumar Keshav gets a pat on back, gets four month extension 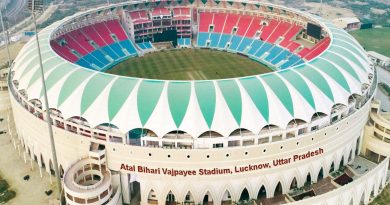 LUCKNOW HOPES TO GET CHANCE TO HOST IPL QUALIFIER