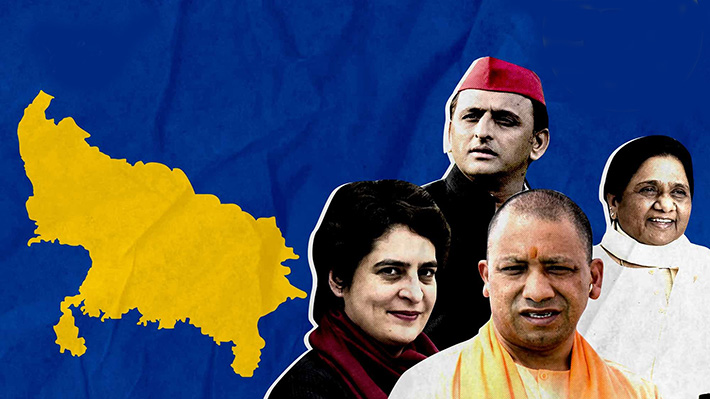 Lucknow: This election in 2022 is far more exciting than the 2017 assembly elections or the 2014 and 2019 Lok Sabha elections, all of which were dominated by the BJP.

SP-BJP are in tough competition

In this election, the Samajwadi Party and its allies, such as the Rashtriya Lok Dal, the Suhaldev Bharatiya Samaj Party, the Mahan Dal, the Pragatisheel Samaj Party (Lohia) and the Janata Party (Socialist), are challenging the BJP’s might.

The NDA, under the leadership of the BJP, had made huge gains in the elections – it won 325 seats in the 2017 assembly elections and had a vote share of 41 per cent. No party or coalition had touched this figure in the last two decades.

But in this election, under the leadership of Akhilesh Yadav, the SP has projected itself as the main opposition party and has occupied a large anti-BJP space in the state.

It has got this advantage at the expense of Bahujan Samaj Party and Congress, especially in terms of Muslim votes. Apart from this, due to the farmers’ protests, it has also grabbed a large part of the Jat votes of the BJP.

The SP has tried to go beyond its party’s Yadav and Muslim base, and has tried to woo non-Yadav OBCs and Dalits, in addition to the RLD’s Jat base.

While in the first phase the losses were mainly due to the conversion of Jat votes after farmer protests, in the second phase the Muslim votes turned in support of the SP-led alliance which could hurt the BJP.

Communities like Gujjars and Saini may also shun the BJP and move towards the SP-led alliance.

The BJP may lose in most areas of Muzaffarnagar, Shamli, Baghpat, Meerut, Hapur, Saharanpur and Rohilkhand, but may continue to dominate in districts like Gautam Buddha Nagar, Ghaziabad, Bulandshahr, Agra, Aligarh and Kasganj. This indicates that there was not much communal polarization in the election. And it may work in favor of SP.

Barring Yadav-dominated districts, such as Mainpuri, Etawah and Kannauj, the BJP would have gained in areas where voting took place in phases 3-5. The upper caste population is comparatively more here, and the Yadav, Jatav and Muslim people are less.

In some seats of Lucknow City, such as Lucknow West, Lucknow Central and Bakshi Ka Talab, the SP could face a setback with clever distribution of tickets courtesy BJP.

In Bundelkhand, BJP may suffer loss in vote share but due to the huge gains last time, there may be less loss in terms of seats. Overall, though the BJP may enjoy a big lead over the SP, it may still suffer a bigger loss than in 2017.

However  there is no direct anger towards PM Narendra Modi. From the ground level reports, it seems that the popularity of PM is still tremendous.

Many people, who had to suffer due to the lockdown in Covid-19 or the lack of jobs, also do not seem to blame the PM for this.

A somewhat tricky situation for the BJP is attributed to the fact that Swami Prasad Maurya, Dara Singh Chouhan and many MLAs, especially those from OBC background, have said goodbye to the party.

There is a perception law and order situation has improved under Adityanath, but statistics show that the ‘reform’ is not as clearly visible as the BJP claims.

In early January, it seemed that the BSP was not campaigning to its full potential, this gave the SP an opportunity to project itself as the main opposition party in the state. The BSP, however, picked up the pace and may have tried hard to retain its original vote base.

The BSP’s hopes seem to rest on the party’s core Jatav base.

The Congress campaign has created quite a stir – especially with the slogan ‘Ladki hoon laad sakti hoon’. Priyanka Gandhi Vadra seems to have worked hard during the campaign and has drawn the crowds.

However, in terms of seats, the party can largely rely on the support of individual candidates. Some of its strong candidates include Aradhana ‘Mona’ Mishra in Rampur Khas, Ajay Kapoor in Kidwai Nagar, Ajay Kumar Lallu in Tamkuhi Raj, Sushil Pasi in Bachhrawan, Vijay Pasi in Jagdishpur.

In all 103, SP is not the runner-up. Thus, even if the BJP slips to all 103 seats in addition to retaining all its seats, it will still be far short of the majority.  Unless the SP achieves this, the likely outcome could be that the BJP gets a near majority.

The SP-RLD alliance has been successful in siphoning off a major chunk of the Jat vote from the BJP. It is not certain whether the SP-led alliance will be able to grab any other large voting bloc from the BJP. It is felt that Kurmi, Maurya, Saini, Gurjar and other OBC caste groups may be moved away due to the selection of candidates or due to local factors.

Dalit voters may turn away from BJP. The SP can benefit from this, but it is not necessary that they alone will benefit. Congress is also getting an edge. The SP has wooed the non-Yadav OBC people, it doesn’t seem that the BJP has suffered as much in this part as it did among the Jats in the sugarcane sector.

One such issue is the announcement of the restoration of the old pension scheme of the SP. It has gone well among government employees. Another issue is unemployment.

To sum it up may the best candidate win.