Lucknow: In order to prevent the manufacture, sale and smuggling of illicit liquor across the state, the Excise Department is continuously conducting special enforcement campaigns for checking.

Giving this information, Additional Chief Secretary Excise  Sanjay R. Bhoosreddy said that during this campaign raids are being conducted by the joint team of Excise, Police and Administration at suspicious places and along with verification of stock of licensed shops- Along with this, intensive testing of bar codes and QR codes is being done.

Bhoosreddy said that under the direction of the Excise Commissioner and the Deputy Commissioner, Kanpur charge, on August 16, 2021, under the leadership of District Excise Officer, Kannauj, a sudden raid was carried out in Kutlupur, Mahchandpur Dahlepur, suspected village of Sadar Tehsil of the district.

During the raid, 10 liters of illicit raw liquor was recovered, which was confiscated. On the spot, about 100 kg of Lahan was also seized and destroyed and action was taken under relevant sections of the Excise Act. Along with this, checking of Agnihotri Dhaba, Shiva Dhaba, Kannauj Dhaba, Shiv Shakti Dhaba was done.

District staff including  Ranvijay Singh, Excise Inspector, Zone-1 were present in this action. To stop the manufacture and sale of illicit liquor, this type of action will continue. Similarly, under the efficient guidance of District Magistrate, Jalaun and Deputy Excise Commissioner Jhansi, under the special enforcement campaign, police, administration and Excise Department along with May staff were raided in Kabua Dera Umrar Kheda. During the raid, 22 liters of raw liquor was recovered and 1 case was registered.

According to the instructions given by the Excise Commissioner and District Officer Azamgarh, Excise Inspector Zone 1, Zone 4, Zone 6 and Zone 8, Azamgarh, the Excise staff were raided at suspicious places, recovered 06 liters of illegal raw liquor in the raid and registered 01 case. Gaya, and inspection of excise shops along with suspicious places were also done.

On the orders of Deputy Excise Commissioner Kanpur in charge, Kanpur and on the instructions of District Excise Officer Farrukhabad, under the enforcement campaign being run in district Farrukhabad, Excise Inspector Neeraj Tiwari area 1 and Sachin Tripathi area 3 were raided by the staff in suspicious village Mehrupur Ravi police station Kamalganj. Went. About 30 liters of raw liquor was recovered on the spot and about 100 kg of Lahan was destroyed and 01 case was registered under relevant sections of the Excise Act. Surprise inspection of Pipargaon country liquor, Nusratpur country liquor, Gadanpur Devrajpur country liquor and Hardev Nagar country liquor shops was done by the excise team.

U.P. government keeping its vigil tight on a new wave of Corona 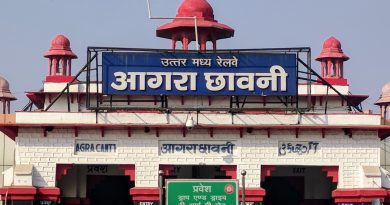 Agra Cantt Railway Station to be made truly world class