Lucknow: The queuing of stalls and beautifully done decorations, tableaux, selfie center and other beautiful displays are  attracting the people in the Uttarakhand Mahotsav at the Birbal Sahni Marg grounds, named after Pandit Govind Ballabh Pant.

Various colorful cultural programs running on the grand stage and many competitions going on during the day attracts the visitors to the festival. The presentation of Cholia Dal also keeps presenting glimpses of folk culture in between.

The second day of Uttarakhand Mahotsav – 2021, organized by the Uttarakhand Mahaparishad, was inaugurated by lighting the lamp by  Avnish Awasthi, Additional Chief Secretary – Home, Government of Uttar Pradesh as the chief guest. In his address, he appreciated the work being done by the Uttarakhand Mahaparishad in the field of folk art and culture and emphasized that the organization of such festivals provides a wide platform to the folk artists through which the folk artists of the folk culture. They propagate and promote their traditions and heritage by becoming a messenger.

In the first session of cultural programs organized in the festival, various cultural programs were performed by artists of all age groups from 2 o’clock in the day to 06 pm. More than 50 people participated in the solo dance competition, in which Janhvi Bisht, Niharika Kashyap first, second and Kanishka Bisht got third place. Apart from this, consolation prizes were also distributed. Artists of Vishal Parangat Dance Academy, Pant Nagar Cultural Committee brought alive the stage of the festival with their dance and singing.  Pushpa Vaishnav, Haritima Pant, Renu Adhikari, Laxmi Joshi, Sunita Kanwal, Sita Negi, Poonam Kanwal, Renu Tiwari conducted the programs of the first session.

Some artists who came from Rajasthan under the leadership of Leela Devi not only introduced the people to the dance and folk songs of Rajasthan, but also entertained them to the fullest. Babaramdev whose Ram Deora has a temple in Rajasthan is the folk dance of that place. The folk songs of Uttarakhand made Uttarakhand into the golden evening of Awadh. Team led by Pinky Nautiyal presented a group dance on Kumauni – Garhwali songs. As the last program in the series of cultural programs, the dance drama ‘Draupadi’ was beautifully staged by the team of  Rauni Singh.

While the spectators present in the festival enjoyed cultural programs by clapping the artists, on the other hand, more than 200 stalls located at the festival site bought famous items of different provinces and at the stalls installed in the food corner. 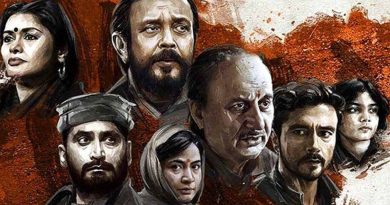