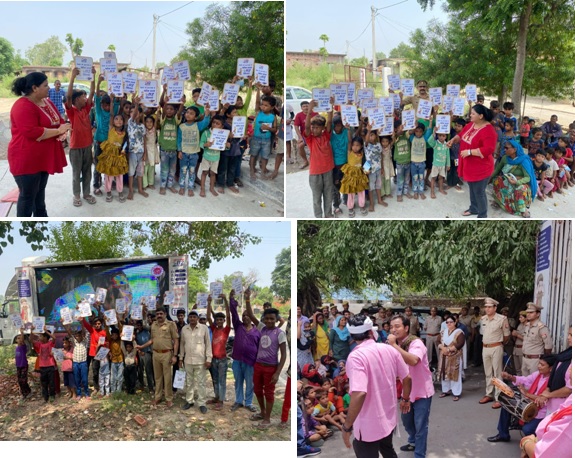 Lucknow: The team of Lucknow Headquarters told the services of 112 to the citizens in Bareilly, Pilibhit and Shahjahanpur

UP-112’s three-day program ‘Know Your 112’ concluded. The teams of Lucknow Headquarters along with the local police under the direction of ADG-112 apprised the citizens about the various services of the Police Department in the border villages adjoining Indo-Nepal and Uttarakhand in Bareilly, Pilibhit and Shahjahanpur.

The villagers living near the international border were told that on seeing any suspicious person or object, they can immediately inform UP-112.

The team explained how the services can be availed through short films of 112K services on LED vans.
Social security priority of the elderly and women

Special schemes are being run by UP-112 to provide social security to the elderly and women. Additional Superintendent of Police Mohini Pathak said that apart from domestic violence and assault, 112 number can also be dialed in any emergency like fire, natural calamity, medical emergency.

During the campaign, through folk songs, the artist  informed about the Savera scheme for the elderly, strong response for women and help of PRV at night to the women going home alone.

During the awareness campaign, a comic book made by 112 was presented to the children. In the comic book, it has been told through cartoons that when the help of the police can be taken. It has been told in the comic book that if the call is not being received on 112 for some reason, then citizens can also tell their problem through WhatsApp, Twitter, Facebook.

There is also dialogue in regional languages

Keeping in mind that citizens, especially the residents of rural areas, do not face any communication problem in taking the service of 112, the communication officers sitting in the headquarters are proficient in communicating in the regional language as well. The communication officer sitting in the headquarters is able to communicate with the citizens in languages ​​like Braj, Bhojpuri, Bundeli, apart from the local dialect. So that citizens can feel comfortable in expressing their problems. It is worth noting that earlier 112 have also launched ‘Know Your 112’ campaign in the districts of Gorakhpur, Maharajganj, Kushinagar, Varanasi, Mirzapur, Ghazipur etc.

Awareness was made regarding the public utility services of Uttar Pradesh Police like Twitter service, Fake news etc. Along with this, it was also told that for non-registration of FIR, police misbehavior or character / passport verification etc., you can register your complaint by tagging the Twitter handle of Uttar Pradesh Police @uppolice, on which the senior officers of the department will take immediate cognizance of the complaint. do disposal.