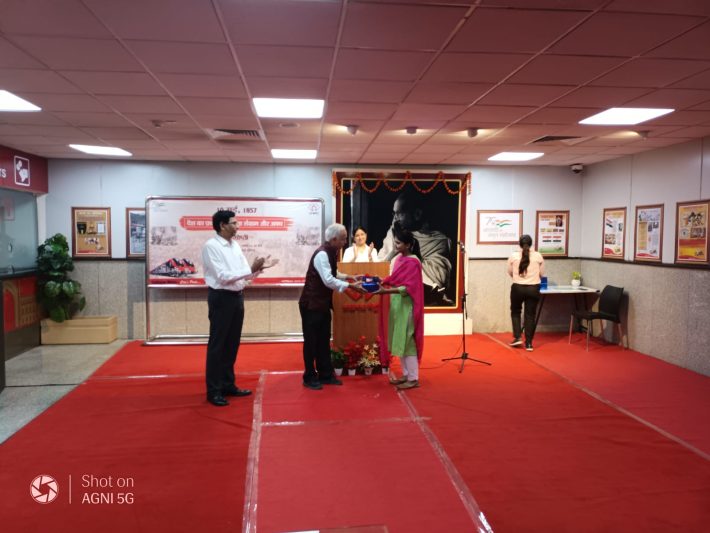 Lucknow: UPMRC  paid tribute to the martyrs and freedom fighters of the revolution of 1857 to commemorate its 168th anniversary. A special programme ‘Role of Awadh in Gadar’ was organised by UP metro at Hussainganj metro station to pay homage to the revolutionaries while remembering their sacrifices and contribution in India’s road to independence.

In the program, prominent historian,  Ravi Bhatt and students of Techno Group enlightened the audience with their inspiring views and thoughts on the role and importance of Awadh in the revolution of 1857.

The program began with welcoming of  Ravi Bhatt by Director (Operations) with a plant sapling. While addressing the gathering comprising metro commuters, students and UPMRC employees,  Ravi Bhatt narrated many anecdotes and real life incidents and stories of Awadh region in the revolution which was liked and appreciated by the audience.  Ravi Bhatt talked about the history of India and first war of Independence. He also talked about the mutiny of 1857 at British Residency in Lucknow, highlighted the significance of Meerut mutiny and sacrifices of Rani Laxmibai and other freedom fighters.

It was followed by a poetry recitation competition in which students of Techno Group of Institutes and metro employees took part and recited poems on ‘Veer Ras’ reminiscing about days of revolution.

Sushil Kumar, Director (Operations) awarded the winners of poetry recitation competition and also appreciated the other participants of the poetry competition for their efforts. The top 3 winners in poem recitation were Atika Ansari & Megha Mishra from Techno Group & Namrata Rana from UPMRC respectively.

He said, “While remembering these freedom fighters there is a need to use their energy and take inspiration from their patriotism and sacrifices for the country. This energy should be channelized among the youth for the development of nation. This event has given recognition to the martyrs of 1857 and we have organised this event in their remembrance”.  Swadesh Kumar Singh, GM/Operations concluded the event with a vote of thanks while paying homage to the martyrs for their sacrifices and also thanked all the participants, audience and employees of UPMRC for their active participation in this event.