Under the aegis of Uttar Pradesh Handball Association and District Sports Development and Promotion Committee, Uttar Pradesh defeated Uttarakhand by 23-1 goals in this championship which started at KD Singh Babu Stadium.

In this Group C match, the hosts showed aggression from the beginning and put pressure on the rival team and took a 10-1 lead by half time. At the same time, the Uttarakhand team, which was a victim of pressure from the beginning, could not recover till the end.

Sheetal and Radhana scored 7-7 goals for the hosts. The same Aarti and Moni scored 3-3 goals. On the other hand Shivani could score the only goal for Uttarakhand. Rajendra Kumar Tiwari, Chief Secretary, Government of Uttar Pradesh inaugurated the event after getting acquainted with the players. In his address, he said that the Uttar Pradesh government is creating new stadiums and facilities to take sports to the masses and rural areas. The government is also making sports grounds in every village.

With this, an international level sports university is coming up in the state. He said that the UP government would soon also honor the medal winners of Tokyo Paralympics. Additional Chief Secretary Mahesh Kumar Gupta honored the players representing international level.

Simultaneously, in a function organized in the evening, the Additional Chief Secretary to the Governor, Mahesh Kumar Gupta (IAS) honored the players Afreen and Moni Choudhary, who made the country proud on the international stage.

Afreen and Moni Choudhary from Uttar Pradesh represented the Indian team in the 8th Asian Youth Women’s Handball Championship held in Jaipur from August 21 to 30, 2019.  Mahesh Kumar Gupta in his blessings said that team spirit is important in sports. Along with this, we also have importance of discipline and the spirit of unity. We should keep this thinking in mind that we will win the game only when we move forward with team spirit.

On this occasion, the General Secretary of Uttar Pradesh Handball Association, Dr. Anandeshwar Pandey said that the Chief Minister, Hon’ble Shri Yogi Adityanath has given a new direction to sports in the state and has taken exemplary initiatives to promote sports in every village.

In the other matches played today, Kerala beat Gujarat by 9-5 goals in Group G. Nikita and Archana scored 3 goals each while Neha contributed two goals for the winners. In Group F, Andhra Pradesh beat Damandiv by 18-2 goals. In this match, Andhra Pradesh was leading by 18-2 goals till half time. Tulsi scored 5 goals, Rakhi 4 and Surbhi and Naga Prasanna scored 3 goals for Andhra Pradesh. In Group A, Telangana beat Assam by 15-7 goals. Telangana took a 5-3 lead till half time and Asma and Haritha contributed the most 6-6 goals in the team’s victory. In Group E, West Bengal beat Maharashtra by 11-2 goals. M. Rai scored five goals and B. Rama scored three goals for the winner. In Group B, Haryana beat Jammu and Kashmir by 15-2 goals.

Increase in number of voters in Uttar Pradesh by 31 lakhs 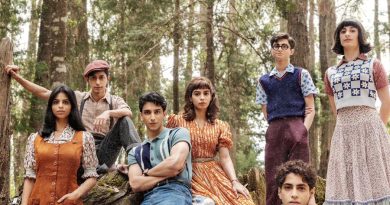 INTRODUCING THE BRAND NEW CAST OF NETFLIX’S ‘THE ARCHIES,’ DIRECTED BY ZOYA AKHTAR

To clear backlog of pending maps in city, one day in week to be observed as Map Resolution Day