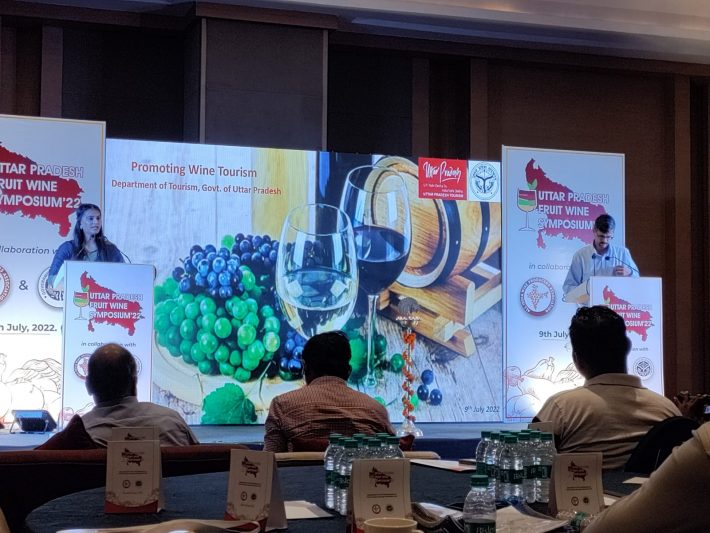 In the first seminar, Excise Commissioner Senthil Pandian C. made aware all the investors and fruit growers who had come to the conference for the establishment of wineries industry, about wineries rules. It was told by him that the Winery Rules in Uttar Pradesh were first published in 1961 and then amended for the first time in 1974. Again it was amended in 2022 making the rules and restrictions more easy for the wineries industry under the Ease of Doing Business.

Similarly, fruits like bel, amla, guava, papaya are produced in abundance in Uttar Pradesh under sub-tropical. In the Bundelkhand region, mainly bael, lemon, guava and papaya are produced. It was told by him that Uttar Pradesh is one of the largest producers in the production of fruits in the country. While telling about the winery, suggestions were also invited from the investors and fruit growers to make the winery rule more easy and accordingly necessary amendments were also given.

Rajesh Rasal of M/s Fruit Wines in his presentation said that fruit and berry wines are fermented beverages made from different types of fruits (other than grapes) and different flavours. This can include wines produced from fruits such as apples, strawberries, plums, peaches, prunes, tropical and subtropical fruits such as oranges, mangoes, bananas, pomegranates and pineapples, yielding a good amount of juice upon extraction. It was also pointed out by him that for the production of berry and fruit wines, pressed juice is made from berries and fruits such as apple, pear, pomegranate, plum, peach, cranberry, raspberry etc. In general, the process of making berry and fruit wine is the same. Wine from grapes, ie berry or fruit mash, is first pressed, and then the pressed juice is fermented.

Since most of these berries and fruits are either low in sugar or high in total acidity or both, improvisation with sugar and water is practiced before, during, and after fermentation. Wines are rapidly fermented and are rarely aged for long enough to preserve their distinctive flavor and aroma. Older wines are sometimes mixed with freshly made wines to bring back the flavour.

The investors were also made aware of the facilities given in the rules under the wineries rules by him. Apart from this, he also sought suggestions in this regard from the delegates who had come to the conference and accordingly assured to amend the wineries rules as needed.

Anil Sahni, Director presented his views on the contribution of farmers in relation to the fruit based wine industries of the farmers. It was told by them that 30 percent of the fruits produced by the farmers are saved from being used properly. It is necessary to encourage the winery industry to use these fruits. He also told that the products made by the farmers in other fruit based industries have expiry date, in which the farmers do not get proper price. The winery industry can prove to be of great help to the farmers in getting good value for their cost and increasing their income. He also told that it is often seen that the fruit orchards are getting cut due to not getting good price for the fruits to the farmers, which will prove useful for the wineries industry to save and develop more orchards. The wineries industry is completely eco-friendly, in which there is no environmental pollution and no harmful waste material is released. Small amount of waste can be used as fertilizer. Along with this, while giving suggestions regarding the promotion of small wineries industry, emphasizing on setting up small industries in the form of boutique winery, he said that rural tourism would be encouraged from boutique winery. He thanked the officials of the Excise Department in Uttar Pradesh for taking initiative in the wineries industry and for organizing this seminar.

Special Secretary, Tourism Dr. Ashwini Pandey in his address apprised of dream project of Trade, Technology and Tourism being run by the Prime Minister. It was told by him that with the advent of winery industry, while rural tourism would get a boost, on the other hand, fruit producing farmers would be benefited in large numbers. Delegates were also apprised about several schemes related to the winery by him.

Similarly, RK Singh from the Food Processing Department said that on the initiative of the Excise Department by the winery companies, processing the leftover fruits from the consumption of the fruits produced by the farmers, said a commendable step to promote the wine industry. It was informed by him that a total of 24314 units of small and big fruit based industries have been established in the state, due to which the state is getting an investment of Rs 335 crore. It was told by him that 100% consumption of fruits to the farmers in the winery industry would help in increasing their income significantly.

Emphasizing on setting up of Pulp Industries in the form of small industries by them, it was also told that industries can be set up at very low cost and in less space. Small farmers will also come forward in setting up this industry. It was apprised about the abundance of pulp found in the indigenous variety of Gola Mango in Uttar Pradesh and it was also told that such small pulp industries would encourage the development of the winery industry.

Rahul Singh, while elaborating about the winery industry, while linking it to the one district one product scheme, it was told that in many districts special types of fruits are produced in abundance. Establishment of winery industry in these districts by making use of leftover fruits from consumption and other industries will prove to be helpful in increasing the income of the farmers.

Additional Chief Secretary, Excise Sanjay R. Bhoosreddy, in his address, described the farmers and industries as the biggest investors, stating the deep relationship with each other. It was told by him that even after the farmers did not know about the divine calamity, the farmer does farming work with great enthusiasm. It was told by him that at present, many types of schemes and programs are being run by the government for the purpose of doubling the income of the farmers. Government schemes for setting up small scale industries are being run through the concerned departments. In establishing the winery industry by him, emphasis was laid on working according to the mutual needs of both the investors and the farmers, describing them as complementary to each other. Special emphasis was laid on the management of orchards by taking advantage of the necessary instructions and schemes from the Horticulture Department for maximum fruit production to the farmers. Explaining less space and less cost in setting up the winery industry, it was told as a means of good income. With orchard management, small boutique wineries can be set up by farmers for the winery industry and small and big farmers can also develop the village as rural remoteness, which will have a favorable effect on their income. It was told by him that in different regions where special types of fruits are produced in abundance, such conferences were organized with the aim of attracting investors and increasing the income of farmers and promoting winery industry. Will keep going and the work of giving a strong economy to the state can be done by farmers and investors.

All the present delegates were made aware about the machines and technology, the cost of setting up the industry and capital investment for the establishment of the winery industry, by the delegates who provided the plants and machinery in relation to the winery industry in the conference. Various types of queries and expectations were discussed by the delegates present in the conference.

Ahead of election year on U.P budget day, Expressways could get a booster dose

With 343 more villages under its ambit, Ayodhya to get grander