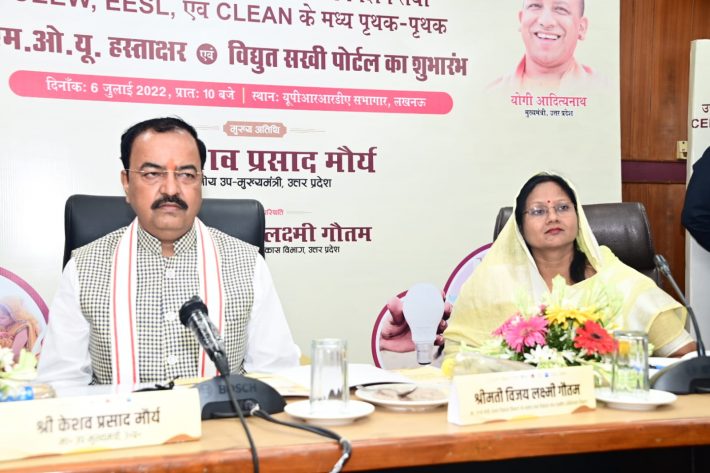 Lucknow: Under the Prerna Ojas program by the Uttar Pradesh State Rural Livelihood Mission, to promote solar energy in rural areas, under the chairmanship of Deputy Chief Minister  Keshav Prasad Maurya, the livelihood mission and Asia’s leading organization Council for Energy Environment and Water, Energy Efficiency Services Limited in the auditorium of the UP Rural Road Development Agency held a progrtam related to signing of MoU was completed. Along with this, the Vidyut Sakhi portal was also launched by the Deputy Chief Minister.

On this occasion, Deputy Chief Minister  Keshav Prasad Maurya said that MoU being done by Aajeevika Mission under Prerna Ojas to expand solar energy in rural areas would pave the way for self-employment as well as economic progress to rural women. He said that apart from preserving the environment by the use of solar energy, mineral wealth produced by nature would also be protected.  Maurya said that the institutions with whom the MoU is being signed are the leading institutions of the country, which are expanding solar energy and motivating the common man to use it. He said that while the consumption of electricity would be reduced by the use of solar energy, the common man would get the benefit of naturally generated light. He said that solar energy is a powerful means of living with natural light.

The Deputy Chief Minister said that with this MoU, the self-employment of rural women especially the didis associated with the Aajeevika Mission will increase and this will also lead to their social development. He said that various self-employment programs are promoted in rural areas by the women of Self Help Groups. He said that now the Self Help Group sisters will take a step forward and develop themselves as Ojas Entrepreneurs and play an important role in building a strong nation.

He said that by being proficient in making solar powered devices, LED bulbs, BLDC fans and tube lights etc. would be manufactured by them. He said that solar energy would be delivered to every village by the women of Self Help Groups. The Deputy Chief Minister informed that Prerna Ojas Shop would be set up in 826 blocks under Prerna Ojas to promote solar energy by Aajeevika Mission and assembly center would also be set up so that if there is any defect in the products of solar energy, it would be removed. can be fixed at the local level.

On this occasion, Deputy Chief Minister launched Vidyut Sakhi Portal. During this, he said that through this portal, Vidyut Sakhis will have access to perform many tasks from a single platform. Daily progress of the works being done by Vidyut Sakhis can also be reviewed through the portal. Through this, Vidyut Sakhi will also be able to get information about their daily work. Electricity bills of Rs 169 crore have been deposited by Vidyut Sakhis so far, due to this work, Vidyut Sakhis have got the benefit of 2.36 crore since the beginning of the scheme.

He said rural women would become a symbol of solar power in the entire state. He said that solar energy is an ideal source of energy which saves the environment as well as the conventional fuel. Said that solar energy would also be used in various activities conducted by the Aajeevika Mission.

Minister of State for Rural Development,  Vijay Laxmi Gautam expressed confidence that this MoU will surely yield far-reaching results and development will gain more momentum. On this occasion, Mission Director  Bhanu Chandra Goswami informed that Council for Energy Environment and Water (CEEW) is one of the leading institutions in Asia which provides solar energy equipments to the general public. Under the Prerna Ojas program with the help of this organization, women of self-help groups associated with the Aajeevika Mission will sell various products powered by solar energy in rural areas.

He said that Villgro Institute is India’s largest institution providing basic assistance and technical support for solar energy through incubation. Villgro has so far made more than 279 social enterprises self-sufficient. Through this organization, women associated with self-help for the use of solar energy will be provided technical assistance in developing solar-powered equipment and will be provided assistance till the establishment of enterprises and becoming self-reliant. Women will also be given information about the economic activities of solar energy by this organization.

Goswami said that the role of a bridge will be played for the clean organization Ojas program. Technical support will be provided by this organization to the self-help group’s sisters to develop them as solar producers in the state and technical help will be given by them for the establishment of Ojas shop. He informed that Clean Sanstha is working for the integration and development of renewable energy sector. This

Assistance will be provided by the organization to the Self Help Groups to demonstrate at the district level for the dissemination of decentralized energy equipment. Along with this, by organizing workshops at the development block level for the use of solar energy, the general public will be motivated to use solar powered equipment. The Mission Director informed that Energy Efficiency Services Limited (EESL) is a joint venture company of 4 Central Public Sector Undertakings of the Ministry of Power, Government of India, through which solar powered bulbs, tube lights, fans etc. is manufactured. Through this organization, the sisters of self-help groups will be trained to make various equipments and sell solar energy products. 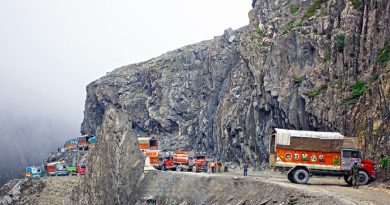