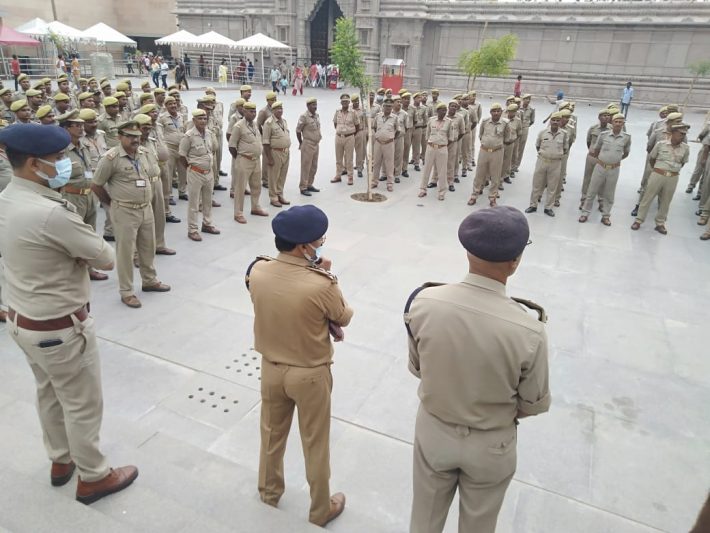 Varanasi: The month of Sawan is upon us. It is that time of the year when  the Varanasi Commissionerate Police  intensifies the preparations. On Sunday, Additional CP (Additional Police Commissioner Crime and Headquarters) Santosh Kumar Singh reached  Kashi Vishwanath Dham and drew a blueprint for security. During this, the policemen engaged in security were briefed. They were explained in detail the  duty of police officers and personnel with full promptness.

Briefing all the police officers and employees in the temple premises, Santosh Kumar Singh said that there should be good behavior with the devotees who come in the month of Sawan. Special care should be taken of the elderly. If any of the visitors face problems in darshan, they should be helped immediately.

Since visitors from all over the country and abroad come to Shrikashi Vishwanath Temple Dham, they should have good image in their minds towards the Commissionerate Police.

In  crime related to women, immediate action should be taken against the accused by getting them investigated. Crime control is a priority, he added. Negligence in this will not be tolerated. On Sunday afternoon, the newly arrived SP Rural Suryakant Tripathi made his intention clear while taking charge in the office at Harhua.

During the meeting with the ASP and all the officers, he said that those who disturb the law and order should not be spared. There should be no negligence in crime control. In view of the month of Sawan, he had a detailed discussion with the police officers.

There are directives issued  to make special arrangements and diversion on the highway, ring road under the rural police stations entering the district.