Mumbai: Veteran actor Chandrashekhar passed away this morning (16th June) at 7 o’clock at his residence. He was 98 years old and would’ve celebrated his 99th birthday on 7th July. He had been hospitalised for a day on 11th June for age-related illnesses. He is survived by two sons and a daughter and their families. Chandrashekhar’s son, Ashok Shekhar, is a well-known television producer. Actor Shakti Arora is Chandrashekhar’s grandson.
Chandrashekhar acted in around 250 films. Although he started out as a junior artiste, he went on to play lead roles and then character roles in films. Among the films in which he enacted noteworthy supporting roles are Gateway Of India (1957), Fashion (1957), Barsaat Ki Raat (1960), Angulimaal (1960), Baat Ek Raat Ki (1962), King Kong (1962), Rustom-E-Baghdad (1963) and Jahan Ara (1964).
Born in Hyderabad in 1923, he came to Bombay in the early 1940s. He landed his first job at Shalimar Studios in Pune in 1948 on the recommendation of Shamshad Begum. He then got junior artiste roles in films like Bebas, Nirdosh, Daag, Farmaish and Meenar, all in the 1950s. His first film as a lead actor was V. Shantaram’s Surang (1953). He went on to play lead roles in films like Kavi (1954), Mastana (1954), Bara Dari (1955), Kali Topi Lal Rumal (1959) and Street Singer (1966). Chandrashekhar was cast in a negative role in Basant Bahar (1956).
Chandrashekhar also produced and directed films. His first production and directorial venture was Cha Cha Cha (1964) in which he also played the lead role. This was the film which had Helen in a lead role. In 1966, he produced and directed Street Singer. He was a permanent face in Shakti Samanta’s films and was also seen in a number of Rajesh Khanna starrers like Kati Patang, Ajnabee and Mehbooba. Among the many films he was cast in supporting/character roles are Dharma, Gehri Chaal, Charitraheen, Ranga Khush, Shankar Dada, Saajan Bina Suhagan, The Burning Train, Namak Halaal, Nikaah, Disco Dancer, Sharaabi, Hukumat, Elaan-E-Jung and Waqt Ka Badshah.
Chandrashekhar  was a student all his life. At the age of 50, he decided to assist Gulzar in direction. It may surprise people to know that in the 1970s, he worked as Gulzar’s assistant in films like Parichay, Koshish, Achanak, Aandhi, Khushboo and Mausam. He worked as Arya Sumant (Dashrath’s prime minister) in Ramanand Sagar’s epic TV serial, Ramayan. He retired from the industry at the age of 77 after appearing in Khauff in 2000.
From 1985 to 1996, Chandrashekhar worked as president of the Cine Artistes’ Association. He also served as president of the Federation of Western India Cine Employees (FWICE) and the All India Film Employees Confederation (AIFEC), and vice president of the Indian Film Directors’ Association.
Bombay distributor and financier Shyam Shroff, who was very close to Chandrashekhar, described him as “a very fine human being”. “He was like a family member to me,” said Shroff, adding, “He was at the forefront whenever the industry needed helping hands. He had the rare quality of getting along well with people of all age groups.”
Komal Nahta
नोट: अगर आपको यह खबर पसंद आई तो इसे शेयर करना न भूलें, देश-विदेश से जुड़ी ताजा अपडेट पाने के लिए कृपया The Lucknow Tribune के  Facebook  पेज को Like व Twitter पर Follow करना न भूलें... ------------------------- 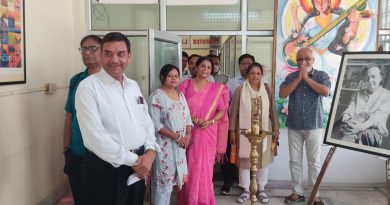