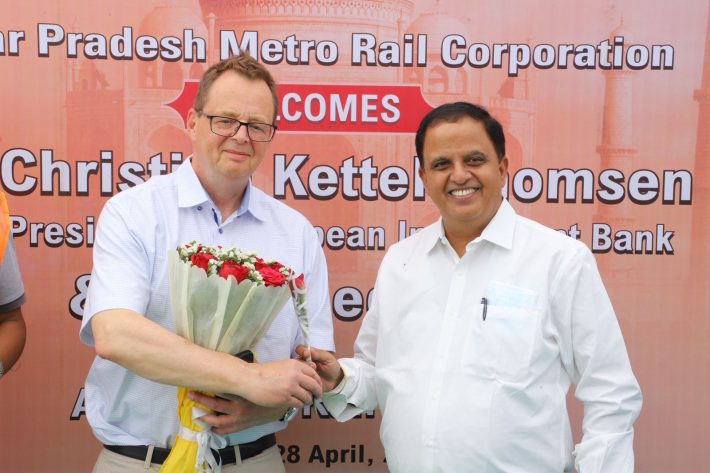 New Delhi:  Christian Kettel Thomsen, Vice-President, European Investment Bank (EIB) along with 5 team members visited the Agra Metro Project on 28th April 2022 to see the speed and quality of the Project which is being implemented under the leadership of Shri Kumar Keshav, Managing Director, UPMRC.

Recently between 9-13th April 2022, the team of investment officers from the EIB also visited the ongoing Metro projects of UPMRC, where they were immensely impressed with the pace of the Agra Metro Project work and the way it is moving ahead so fast in such a quick time. They also visited and took the train ride in Lucknow and Kanpur Metro’s operational routes, which is a splendid example of engineering and technology.

During their Lucknow visit, they interacted with the Chief Secretary of Uttar Pradesh, Shri Durga Shankar Mishra and expressed their interest to associate with the forthcoming Gorakhpur Metro Lite Project in Uttar Pradesh.

Speaking on the same, VP Mr. Thomsen said that the European Investment Bank (EIB), as the Bank of the European Union, is proud of its contribution to this project because it will improve the quality of life for the citizens and visitors of the historic city of Agra, and will help India in achieving its climate goals.

Agra is the sixth urban metro rail project that EIB supports in India. It brings EIB’s total approved commitments to the sector to over 3 billion euros, of which over 2 billion euros have been signed.

These investments translate the India-EU Connectivity Partnership into tangible improvements for India’s people, and accelerate green, sustainable and inclusive growth.

“I would like to thank our partners at UPMRCL for the opportunity to be a part of Agra’s sustainable future”, he added.

The European Investment Bank (EIB) shall be funding EURO 450 million for the Agra Metro Project, which is made available to UPMRC through gross budgetary resources in the form of Pass-Through Assistance (PTA) from the Government of India.

Weekend lockdown from April 24 in U.P

A unique combination brewing for the Battle of Bengal