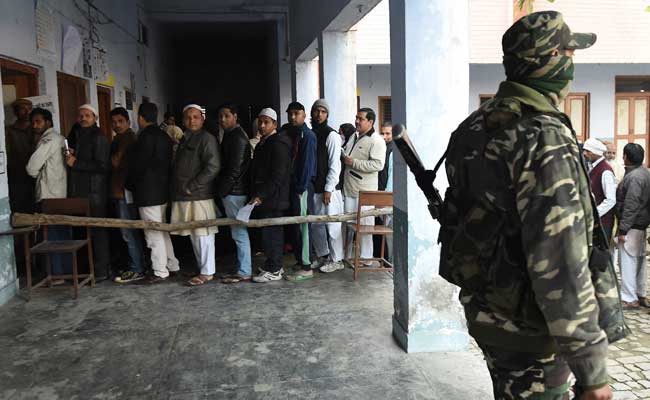 Lucknow: Voting for 58 seats in western Uttar Pradesh began on Thursday amid tight security. Due to this, tight security arrangements were made in sensitive and vulnerable areas. This time there was a lot of enthusiasm among the people to vote. Voters started arriving at the polling centers early in the morning. At the same time, special arrangements were made for the convenience of the differently-abled at all the polling stations during this period. Special arrangements have been made for first and handicapped voters at many places for voting. Meanwhile, many pictures are constantly making headlines on social media.

The elderly, including the youth, are not looking back from voting. At the age of 90 in village Bijauli of Kithor assembly, elderly Mata Prakashi Devi ji exercised her vote along with family members, which is being liked a lot on social media. At the same time, BSF jawans were also seen helping disabled people.

Selfie points have also been created for the first time voters in Jewar, where voters can take selfies after casting their votes. At the same time, the #VoteWaliSelfie hashtag has been trending throughout the day on the social media platform Ku app. With the commencement of the first phase of elections on February 10, this campaign is being run only to make the common people aware of voting. With this hashtag, voters, politicians and first time voters also took selfies after casting their votes to make others aware to vote. Experts say that the Koo App especially wants to encourage the youth to vote. This campaign to make the youth aware through the #VoteWaliSelfie campaign will continue till the last phase of the elections. Voters from all 5 electoral states can participate in this campaign.

Badshah’s Pani Pani now to get a Bhojpuri remake