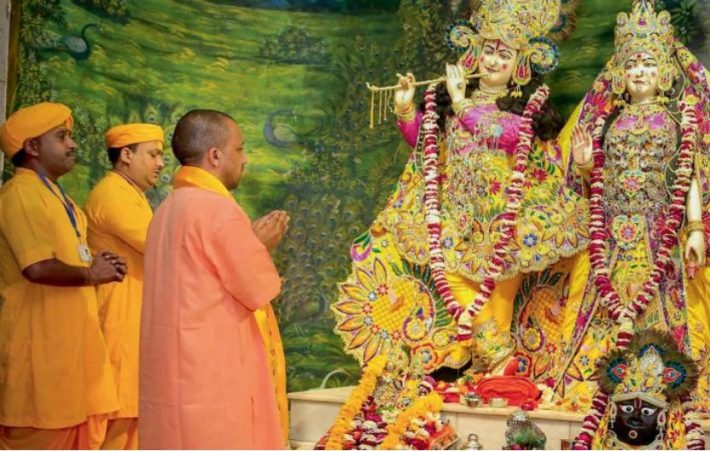 Mathura: Union Home Minister Amit Shah offered prayers at Shri Banke Bihari Temple in Vrindavan yesterday as part of his campaign in Mathura ahead of the Uttar Pradesh Assembly elections. The visit is seen in line with the BJP’s efforts to project Mathura as one of the three symbolic Hindutva strongholds after Ayodhya and Varanasi. There is Krishna Janmabhoomi temple in Mathura, which is the birthplace of Lord Krishna.

Chief Minister Yogi Adityanath and Deputy Chief Minister Keshav Prasad Maurya had recently said that after the temples in Ayodhya and Kashi, it is now Mathura’s turn for revival. Earlier reports had said that Yogi Adityanath may consider contesting from Mathura instead of Gorakhpur. He has visited Mathura 18 times during his current tenure. According to the report, the construction of the grand entrance gate on the road leading to the main temple is going on in full swing. The makeover of the temple has emotional significance for some people here. At the same time, some people also want to focus on the development of Mathura.

Ramesh Tripathi, a local resident sitting at a tea stall near the renovated area, told NDTV, “After Ayodhya and Kashi, Mathura was to be developed. It is very good that the holy temple is being renovated. We BJP. Will vote. But there is also a need to remove unemployment. The situation in this matter has worsened in the last few years.

Colours of Holi Back to Ayodhya’s Ram Mandir