Lucknow: Even as fears of the Cyclone Gulaab increase manifold in the Bay of Bengal, the general public of West Bengal has suffered a lot. Many people have died due to the Cyclone Gulaab. On 29 and 30 September, the effect of this storm can also be seen in Uttar Pradesh, Bihar, Jharkhand, Andhra Pradesh and Orissa.

Among the canceled trains are –

Route of 02703- Howrah Secunderabad Special Train has been changed.

Route of 02543- Howrah Chennai Central has been changed.

An alert has been issued in the Meteorological Department that the effect of Gulaab cyclone can be seen in many states adjoining Uttar Pradesh, Bihar, Jharkhand and Bengal. Due to this cyclone, on 29 and 30 September, heavy rain and strong winds can also occur in many states. The maximum impact of this cyclone will be seen in West Bengal and Orissa. The Meteorological Department has canceled many trains till 29th in view of the possibility of storm and changed the route of many trains. 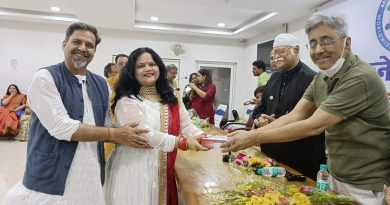 Committed to spreading lamp of knowledge, education over money for SKD Singh

UP Deputy CM goes on a pilgrimage to Nangli Sahib

New Delhi: The race to Raisina is  getting interesting day by day. Yashwant Sinha filed his nomination today as the