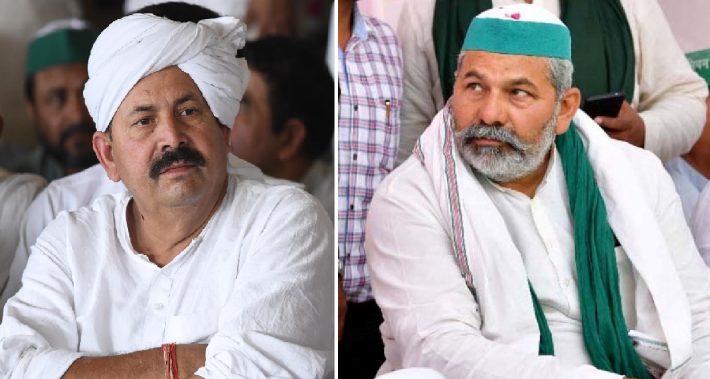 Lucknow: There has been a major reshuffle in the Bharatiya Kisan Union (BKU). Some people have formed a new party, angry with Rakesh Tikait, who holds the post of national spokesperson and the party’s national president Naresh Tikait.

Presently he was the Vice President of BKU. In this regard, it has been told by the sources associated with the party that both the leaders were being accused of working at the behest of political parties except in the interest of farmers.

Due to the displeasure of the farmers, the Bharatiya Kisan Union is now torn in two. Rakesh Naresh Tikait and Rakesh Tikait have separated on the death anniversary of Chaudhary Mahendra Singh Tikait.

BKU’s new organization Bharatiya Kisan Union (Apolitical) has elected Rajesh Singh Chauhan as its new national president on Sunday. At the same time, Harinam Singh Verma has been made the new state president.

The founder of BKYU organized in Lucknow on Sunday. Ch. Rakesh Tikait was heavily criticized in the program organized on the occasion of death anniversary of Mahendra Singh Tikait. After this, the organization had decided to form a separate faction. The farmers also expressed displeasure with their political activities in the program.

Rajesh Singh Chauhan, National Vice President of Bharatiya Kisan Union, after becoming the National President of the new organization, said that this decision has been taken with the unanimous consent of thousands of farmers in the meeting organized on the occasion of death anniversary of Dr. Mahendra Singh Tikait.

For the past several days, it was seen that BKU’s national president Naresh Tikait and party’s national spokesperson Rakesh Tikait were allegedly involved in political work except for the fight for the rights of farmers. In such a situation, this new party has been announced by separating from BKU. In this party, a fight will be fought for their rights by adding maximum number of farmers.

Twitterati feels the pinch as 40,000 fail to send out a tweet