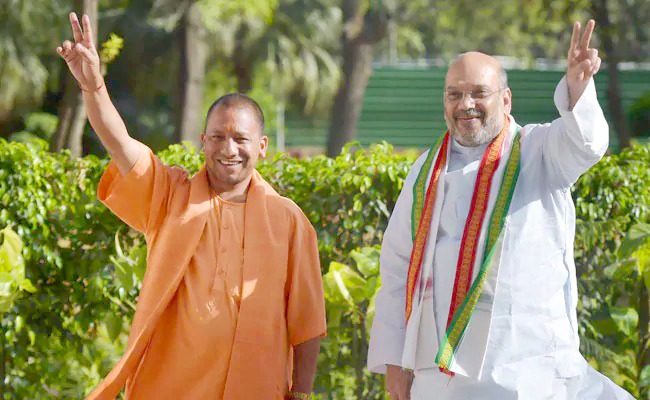 Lucknow: The U.P. Chief Minister to be, Yogi Adityanath has been having a busy schedule in recent days. He has been holding hectic parleys with the top brass in the BJP. He met several top names as a runup to his coronation. Meanwhile, preparations are being made to make the swearing-in ceremony of Yogi Adityanath very grand. The ceremony may take place at the Ekana Stadium in Lucknow.

People from every assembly constituency of the state will be invited at the function. Ekana Stadium has also been inspected. Apart from PM Narendra Modi, Defense Minister Rajnath Singh, Home Minister Amit Shah, BJP President JP Nadda, members of the Union Cabinet and some prominent faces of the Sangh are likely to be present in the ceremony. All other guests include Chief Ministers of BJP ruled states.

Amit Shah and Raghubar Das may come to Lucknow on 19th

The leader will be elected in the BJP Legislature Party meeting just after Holi. The legislative party meeting is likely to be held on March 19 or 20, while the swearing-in of the Yogi government is likely on March 25. If party sources are to be believed, Shah may come to Lucknow on March 19. In his presence, the leader will be elected in the meeting of the BJP Legislature Party. After the election of the leader, the claim to form the government will be presented before the governor.

Speculations are rife that this time many new faces may get a chance in the second cabinet of Yogi government.  In the 403 seats of UP, the Bharatiya Janata Party has created history by winning 273 seats in alliance with allies.

Baby Rani Maurya has been the Governor of Uttarakhand and is a well-known face of Jatav society in Uttar Pradesh. Brijesh Pathak of Brahmin society has been the Law Minister in the Government of Uttar Pradesh. Brijesh Pathak may get the role of Deputy Chief Minister to maintain the Brahmin equation in the Yogi government. Because Deputy CM Dinesh Sharma has not contested the election this time, Pathak may get this responsibility. UP BJP chief Swatantra Dev Singh, who is also a Kurmi leader, is one of the prominent faces of BJP’s big win in Uttar Pradesh.

In the second term of the Yogi government, the leadership is also considering to include two former police officers in the new cabinet. The first name is Rajeshwar Singh and the second Asim Arun. Rajeshwar Singh, the newly elected MLA from Sarojini Nagar seat of Lucknow, was an officer of the UP Police. BJP MLA Asim Arun has also won from Kannauj (Sadar) seat. As many as 10 ministers of his outgoing government have lost the elections.

Shalabh Mani Tripathi, a close confidante of CM Yogi, can be made a minister in the Yogi cabinet. Shalabh has been in ABVP in the past as well. Similar allies Apna Dal and Nishad Party will also get a place in the cabinet – MLC Ashish Patel and Sanjay Nishad can get an important role.

Setting the agenda loud and clear from day 1, after securing a historic consecutive term in office, the Yogi Adityanath government has revived its earlier proposal to hire a private consultant to help the government achieve a $1 trillion economy in the state in next five years.

The Yogi government has invited bids for this ambitious project, saying it wanted to boost its economy to the $1 trillion level by 2027.

The Uttar Pradesh GSDP is estimated to be at around Rs 21.73 lakh crore in 2021-22, translating to about $270 billion. So the target is to increase the economy’s size by nearly four times over the next five years. UP contributes 8% of the national GDP and the CM plans to align the state with the national target and play a leading role.

Meanwhile the Yogi Adityanath government in Uttar Pradesh has immediately made a list of actions to be implemented after the new government is formed in the state. Internal preparations to implement the promises included in the Sankalp Patra or formal manifesto in the first Yogi cabinet 2.0 meeting have begun and taken the first priority of the government.

The government is considering options of opening new cow protection centers and cow safari on the issue of abandoned animals and stray cattle. A decision to pay the sugarcane farmers in 14 days and, if time permits, with interest, is on the priority list. Decisions regarding the recruitment for the vacant posts in many departments are also on the agenda.

The government has also promised to give free cylinders on Holi, preparations for which have already started. There are about 1 crore Ujjwala scheme beneficiaries in UP and about 1000 crores will be spent on this scheme.

Yogi Adityanath has tendered his resignation as Chief Minister of Uttar Pradesh to Governor Anandiben Patel. He will be the first chief minister in the last 37 years to return to power after completing a full term in Uttar Pradesh. Transport department officials have already started working on a plan to implement free bus ride to women above 60 years. Several other commitments like free scooty to women, free gas cylinders to women enrolled with Ujjawala scheme on Holi and Diwali, free power supply to farmers for irrigation would have to be cleared by the cabinet. Increasing the term of punishment for love jihad would have to be cleared by the new assembly.

Rival Turncoats flocking to Samajwadi Party as elections near in 2022