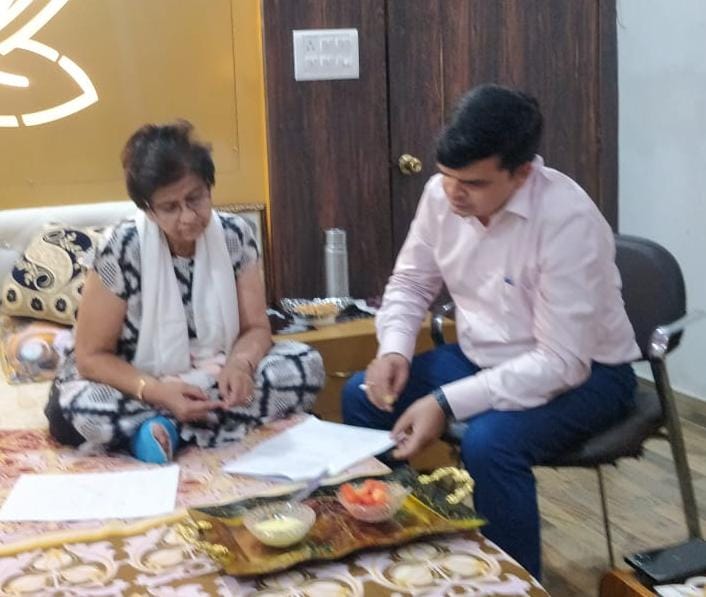 To provide basic civic amenities to the general public like clean and healthy environment, regular cleaning of drains, proper road system, development and maintenance of greenery and parks, street lighting, drinking water etc. The highest responsibility of Municipal Corporation Lucknow.  For this, Mayor Sanyukta Bhatia called Municipal Commissioner Ajay Dwivedi at his residence and made arrangements for discussion.

Mayor Sanyukta Bhatia called Municipal Commissioner Ajay Dwivedi at his residence for the smooth operation of the cleaning system, in view of the absence of large number of sanitation workers and complaints from the public during the inspection of the cleaning system. Plan was made to not give work directly to the organization and to select the working organization from the Gem portal. The Mayor instructed to make smooth rules for taking quality work so that the irregularities related to negligence in the cleaning system and less staffing could be got rid of. Will get in their account and PF and ESI of employees will also become regular.

During this, the Mayor said that the Safai Karamcharis who are working in the corporation will also be accommodated by the organization so that no sanitation worker will be removed. Along with this, I-card should also be issued to all the employees, which ward, boundary and where they are working, in which their unique ID as well as Aadhaar number and phone number etc. will be lying.

Lucknow being the capital of the metropolitan state, cultural, religious and political special programs are being organized continuously in the city and at the same time there is a movement of very special people, due to which the responsibilities of the Municipal Corporation of Lucknow are bound to increase.
The Mayor said that for the purpose of discharging the above responsibilities better, it has been decided to employ the sanitation workers and laborers through the GeM portal.

It was told during the discussion that under this planning process, the city has been divided into two parts (Sis Gomti and Trans Gomti) for cleaning work first. In which different proposals will be invited through the GeM portal. In the invited proposal, labor / human resource will be obtained keeping in view the standard of Public Health Manual and keeping in view the extra specific requirements and additional responsibilities, including the population of the extended area of ​​Lucknow. To be employed in a part of the city to maintain the competitive environment The organization will not be allowed to get work in the other part. Separate tenders for categories like Garden, Street Lighting, Driver etc. will be done through GEM.

By getting human resource/safai karamis through GeM portal, it will be easy to organize the works and better supervision of cleanliness will be done. Due to the competitive environment, apart from reducing expenditure, financial management will also be done efficiently.

Five out of eight drown while out bathing in Saryu river