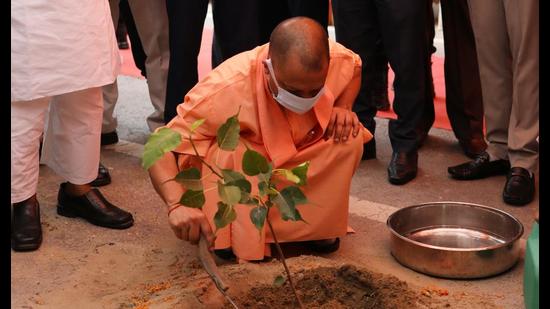 Lucknow: Uttar Pradesh is set to increase its green cover under the state government’s mega plantation drive from July 1. As per the instructions of the Chief Minister, the Forest department is gearing up for the same.

Chairing a high-level review meeting, Chief Minister Yogi Adityanath said that with the spirit of Indian culture of nature conservation, there is a need to take forward the tree plantation campaign as a mass movement. As the massive tree plantation drive is going to start, a detailed program should be prepared in this regard to make this campaign a big success.”

Efforts are being made by the forest department to increase the green cover in the state which will help in pollution control, he added.

According to the State of Forest Report 2021, 9.23 percent of the total geographical area of Uttar Pradesh has forest cover. In 2013 it was 8.82 percent. There has been an increase of 91 square kilometres in the total forest cover and tree cover during 2019.

Indigenous plants like Banyan, Peepal, Pakad, Neem, Bael, Amla, Mango, Jackfruit, and Drumstick will get preference during the plantation drive. The intention of the government is that the plantation during the rainy season should be according to the agro-climatic zone of the area concerned.

Environmental fighters will also have an important role

Cops in Lucknow, ensuring public is well aware of changes in curfew timings