Lucknow: In election rallies, PM Narendra Modi said that UP plus Yogi is very UPyogi. The election results on Thursday also confirmed that Yogi is really useful for UP. In front of the roar of Yogi’s bulldozer, all the opponents were defeated in the state. The result of the public’s faith in Modi’s name and Yogi’s work i.e. ‘MY’ factor was that the BJP government has made a comeback in UP after 37 years.

BJP’s seats may have been less than before, but the party’s vote share has increased.

The main equation of the Samajwadi Party, which was the main opponent of the BJP in this assembly election, was the MY (Yadav, Muslim) factor. The BSP was also trying to repeat the 2007 jugalbandi with Brahmins. Ladki Hoon Lad Sakti Hoon , with the campaign Priyanka was searching for lost ground in UP.

But the BJP’s ‘MY’ (Modi-Yogi) factor outweighed everyone. All the equations of the opponents proved to be dwarfs in front of this pair. In this victory of BJP, people liked the image of Yogi’s immaculate and bulldozer Baba. His leadership was stamped by the people of the state. In the election battle that started from western Uttar Pradesh, Prime Minister Narendra Modi emphasized on better law and order. While PM Modi held 28 election rallies in the state, he played an important role in changing the electoral landscape through road shows and dialogues.

The increased vote share of BJP is a testimony to the fact that it has got votes of all sections. Especially the BJP got the benefit of the weakening of the BSP. The party was successful in breaching the vote bank of the blue camp this time. The BJP also got the votes of Muslim women. This is the reason why BJP faces got victory in Muslim majority seats. Women played an important role in increasing BJP’s vote bank. They voted in the name of schemes of protection and profit.

Showing the effect of double dose of ration

The second important contribution in the victory of the Bharatiya Janata Party was the double dose of free ration to about 15 crore people. Along with the ration, the Yogi government also gave free salt and oil. The results proved that the poor paid their right to salt. Prime Minister Narendra Modi had also called for this in the meetings. The opposition’s claims of farmers’ and Brahmins’ displeasure with the BJP also did not show any merit. The first choice of Brahmin voters remained BJP. 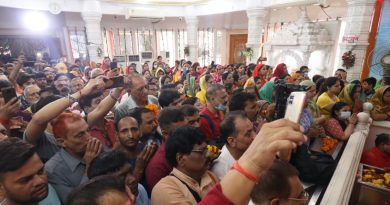