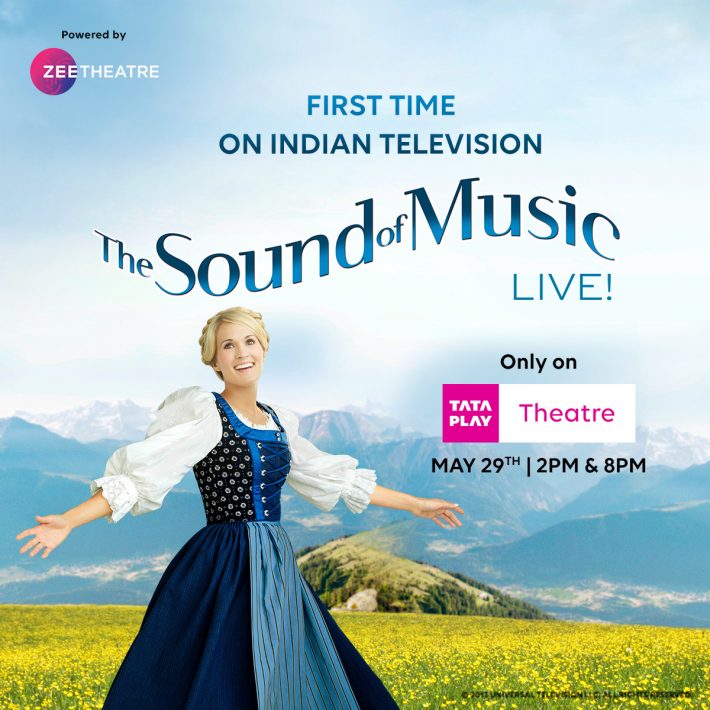 Mumbai: Zee Theatre continues to redefine entertainment in India with a month long celebration of award-winning musical blockbusters on the small screen, beginning with ‘The Sound of Music Live!’  To mark the arrival of the live version of this glorious musical on Indian television, Zee Theatre has synergized with ‘The Aflatunes’, a Mumbai-based A cappella group to create an extraordinary video. A unique A cappella video is created where some of the most iconic musical moments from the soundtrack is recreated.

The video was created understanding the enduring appeal of the classic ‘The Sound of Music’ and melodies like ‘My Favorite things’ and ‘Sixteen going on Seventeen’. The band mixed the energy of beatbox with the sweetness of A cappella while adding a unique contemporary touch to the old favorites. The song has a fresh approach while maintaining the essence without using a single instrument. The video demonstrates how timeless stories and golden melodies never get dated and are reinterpreted in every epoch.

The creators of this A cappella video, ‘The Aflatunes’ says this video was a fresh, interesting, and a fun challenge as they have only recreated a lot of Bollywood songs and Billboard chart-toppers till now.

Talking about the ‘The Sound of Music’, the band was very conscious of elements they could not change. They add, “What a certain song meant to you when you first heard it and what it means to you now could be two different things but as performers, we do not touch certain elements in composition because they are beautiful and have always worked. The essence of ‘The Sound of Music’ is sacrosanct and it was daunting to be approached by Zee Theatre to create a tribute because it has such a high benchmark already. We have tried to let the beauty of the melodies shine while performing them in our own way. I hope the fans of ‘The Sound of Music’ will appreciate what we have done.”

Of the four members, Pearl hails from a church choir background and does a lot of gospel music while Devashri has learnt Hindustani classical music. Nilay plays a lot of Hip-Hop and Pop Rock while Dany is heavily into Hip-Hop. They say, “What glues the band together is our love for music in all forms and the fact that we Indianise every musical piece that we perform. Now we feel as if we are a part of the Trapp family even though if you listen to our covers and mashups, you will see a blend of diverse musical influences. The score of ‘The Sound of Music’ has set such a high bar but we hope that audiences will like our take on it.”

‘The Sound of Music’ will air on TataPlay Theatre on May 29.

Security beefed up in Ayodhya on Babri demolition anniversary