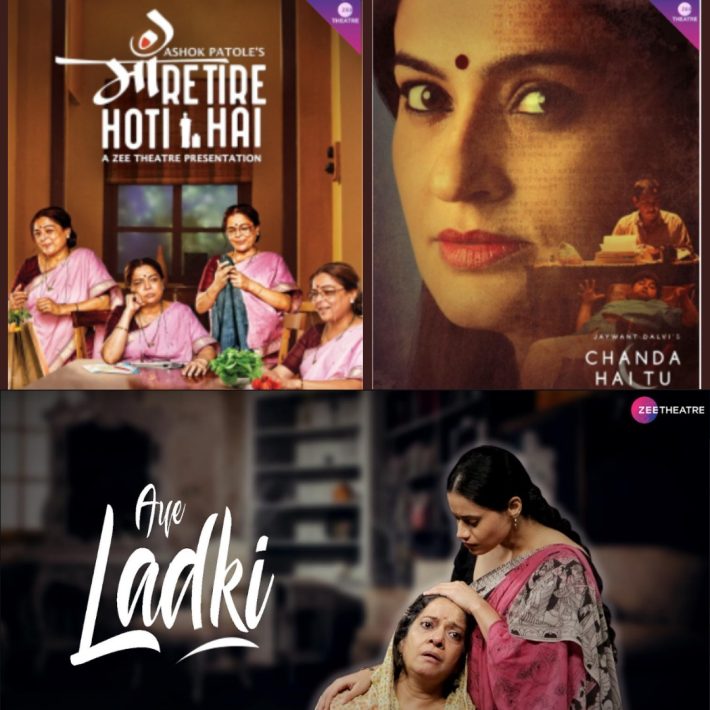 Every Mother’s Day, the work that mothers do tirelessly to nurture their children is glorified without taking into account that they too have human limitations and need a little restful time for themselves. In Zee Theatre’s eleplays like ‘Ma Retire Hoti Hai’, ‘Chanda Hai Tu’ and ‘Aye Ladki’, you will meet women who remind us that mothers too get exhausted and deserve care and support rather than just empty praise.

Aye Ladki: This masterpiece penned by Jnanpith awardee Krishna Sobti, revolves around the relationship between an old, ailing woman and her daughter who is taking care of her. The mother is full of nostalgia for her youth, marriage, pregnancy and the family she built. As her life nears its end, she wonders if she should have done more with her existence. Could she have been more than just a wife, mother, grandmother, the nurturer of a large clan? She occasionally taunts her single daughter for not having anyone to call her own but at the same time, is possessive enough to not let her out of her sight. Between waves of regret and conflicting emotions, she finally understands that her daughter, who she refers to as ‘Aye Ladki’ with disdain, is her own person. And that she herself was more than just the roles she played as a wife and a mother. ‘Aye Ladki’ was written by Sobti as a semi-biographical tribute to her mother. It continues to remind the audience that beyond the responsibilities that women are expected to carry, they are individuals who deserve to chart their own path in life. Directed by Rasika Agashe, the teleplay also stars Sapna Sand, Bhumika Dubey, Manjeet Yadav.

Maa Retire Hoti Hai : Originally written in Marathi by Ashok Patole, this Rajan Tamhane directorial stars the late Reema Lagoo as Sudha, the selfless mother, wife and grandmother who decides one day to ‘retire’ from her household duties. After unconditionally serving her family for decades, she finally does the unthinkable by deciding to live as she pleases. As the play unfolds, we realise that Sudha had been a writer but her potential was snuffed out by domesticity. The play makes astute comments about how women are taken for granted and expected to sacrifice their own happiness for the sake of everyone else. The narrative also depicts how little respect is given to them for all the unpaid toil they do at home. The filming director of the play is Suman Mukhopadhyay and it also stars Yatin Karyekar, Sachin Deshpande, Shweta Mehendale, Sanket Phatak, Mansi Naik and Rutuja Nagwekar. You can watch ‘Maa Retire Hoti Hai’ on May 8 on Dish and D2H Rangmanch Active and Airtel Spotlight.

Chanda Hai Tu: This play has been penned by renowned playwright Jaywant Dalvi’s teleplay, as a poignant tribute to motherhood and parenting. It depicts the difficulties of raising a physically challenged child in the face of limited resources, financial responsibilities and professional obligations. The play’s protagonists are Mr. and Mrs. Shukla who find ways to make ends meet while trying to keep their sanity intact as caregivers of their son ‘Bachu.’ They divide their time to make sure that at least one parent is always at home but Bachu is not always compliant and easygoing and occasionally tests their patience beyond endurance. Mrs Shukla, played by Smita Bansal is also a working woman and someone who occasionally wants just a little respite from her never-ending duties. How she finds hope and light in this bleak existence is inspiring to watch. Directed by Nishikant Kamat for camera, and for stage by Atul Parchure, the teleplay also stars Manav Gohil, Sanjay Batra, Prasad Barve and Atul Parchure.